The Dangers of Space Junk 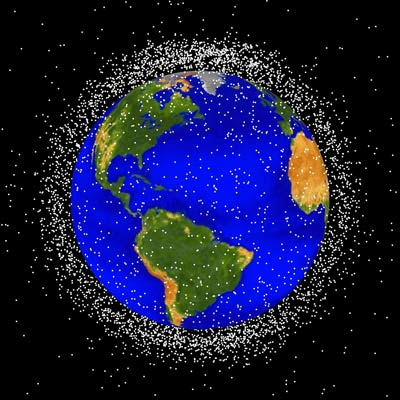 Space junk traveling at high velocities threatens to create even more debris by colliding with other objects.
Image courtesy NASA

The U.S. Space Surveillance Network, a department that tracks debris floating through space and reports to NASA, observes over 13,000 man-made objects orbiting Earth larger than 4 inches in diameter [source: National Geographic News]. That number has only been increasing, up from 9,000 objects in 2000. The organization estimates there are also millions of much smaller objects floating around, and all of it combined weighs about 5,500 tons. Does all this space junk create any problems for space stations -- or even people on the ground?

Although it's hard to believe, many of these objects travel around the Earth at speeds more than 22,000 miles an hour. Anything traveling at a velocity this high would cause a considerable amount of damage to a spacecraft if a direct hit occurred. Even a tiny fleck of paint traveling at such a speed is capable of boring a quarter-inch hole into the window of a space station.

Because there are so many objects flying around up there, there's concern that collisions between debris will only produce more fragments. Even if we stopped launching spacecraft right now and didn't send a single object into orbit, the amount of debris in space would remain constant until 2055 [source: National Geographic News]. After that, things would actually get worse, because the amount of material already up there would inevitably collide and create even more space junk. Experts are worried this is already happening. The most recent case of such a collision, for instance, happened on Jan. 17, 2005, when a piece of debris from an exploded Chinese rocket smashed into a 31-year-old American rocket that had been left alone. The collision only produced four pieces of debris, but observers fear it's only a matter of time before such pieces create an unstoppable chain reaction.

The good news for astronauts is that most space junk is located between 550 and 625 miles above the Earth -- the International Space Station flies in orbit at 250 miles high, while space shuttles usually only reach 375 miles above Earth. Space programs are also working on rocket designs that limit the amount of debris created during a launch.

For those of us on Earth, is there a possibility space junk could fall back to the ground? Everything in orbit will eventually be pulled back down by Earth's gravity -- when that happens depends on how high the object is and how fast it's going. The higher the altitude, the longer the object will take to fall, and it'll take even longer the faster it's speeding around the Earth. These objects could stay in orbit for thousands of years.

And the risks of getting hit on the head? Fortunately, most debris burns up during reentry, and no one has ever been killed by space junk -- UK bookmakers note the chances of space junk landing on a person are at least 20 billion to one [source: The Scotsman].

For lots more information on what's going on in outer space, see the next page.

The Upside of Space Junk Coming Down

How could space junk be helpful to people? An unlikely economic boom has hit Russian villages near the Plesetsk Cosmodrome, which has conducted more than 1,500 launches on nine launch pads. A few days before liftoff of spaceships like Soyuz, Molniya, Cosmos-3M, Cyclone-3 and Rockot, local residents are warned to keep clear of the launch site. After a few days, the villagers return to search for valuable metal scrap from the early stages of the rocket launch. The scrap can be sold, or people can keep parts to use in their houses, including batteries for lamps or stainless steel for construction.