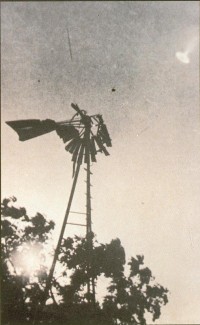 The "UFO" in this picture (upper right) is actually a lens flare caused by the sun (lower left). Investigators tend to view with suspicion any "UFO" photograph when no one observed anything unusual at the time.
Intercontinental U.F.O. Galactic Spacecraft Research and Analytic Network Archives

Sandy Larson, her 15-year-old daughter, Jackie, and Jackie's boyfriend, Terry O'Leary, awoke early that morning, August 26, 1975. Mrs. Larson, who lived in Fargo, North Dakota, was planning to take a real estate test in Bismarck, 200 miles away. At 4 A.M., 45 miles west of Fargo on Interstate 94, they encountered an unexpected, unimaginable unknown.

First they saw a flash and heard a rumbling sound. Then, in the southern sky, heading east, they saw eight to ten glowing objects with "smoke" around them. One was notably larger than the others, and the witnesses had the impression that in some fashion the other objects had come out of it. The UFOs descended until they were above a grove of trees 20 yards away. Then half of them shot away. The three witnesses suddenly felt an odd sensation, as if they had been frozen or "stuck" for a second or two. Then the UFOs were departing. Even more weirdly, Jackie, who had been sitting in the middle of the front seat between Larry and her mother, now sat in the middle of the back seat with no idea how she had gotten there. Moreover, the time now was an hour later.

The following December, Sandy and Jackie separately underwent hypnosis under the direction of University of Wyoming psychologist R. Leo Sprinkle. (Though Terry confirmed the sighting and the peculiar feelings associated with it, he declined the offer to explore the incident further.) Jackie remembered being outside the car in a state of paralysis. Her mother told of being floated into the UFO with Terry. A six-foot-tall robot-like being with glaring eyes put her on a table, rubbed a clear liquid over her, and inserted an instrument up her nose, then performed other medical procedures. Dizzy and nauseous, she felt as if h­er head would explode. After a period of time she and Terry (whom she did not recall seeing inside the UFO) were returned to their car, and all conscious memory of the incident vanished immediately.