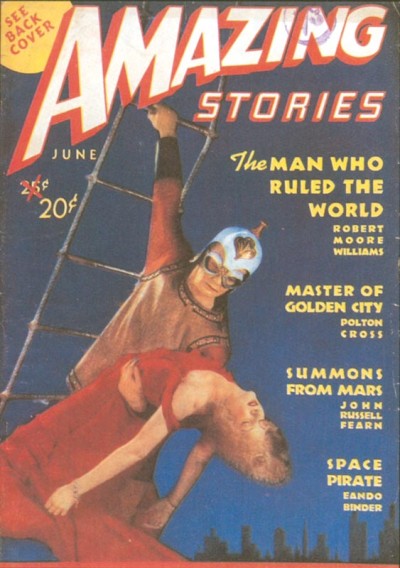 Amazing Stories was the first science-fiction magazine. In the mid-1940s it promoted the bizarre -- and supposedly true -- "Shaver mystery," which anticipated some themes of later UFO lore.
Mary Evans Picture Library

Before there were little green Martians and tall blond Venusians, there were deros.

In the 1930s a Pennsylvania man named Richard Sharpe Shaver overheard them speaking through his welding equipment. And the voices -- singularly unpleasant ones, obsessed with torture and sexual perversion -- would not shut up. Their incessant chatter drove Shaver to desperate acts that landed him in mental hospitals and prisons. While Shaver was serving time in a prison, a woman materialized and whisked him away to a cavern underneath the Earth where she and her fellow teros, though badly outnumbered, battled the dero hordes.

Deros, Shaver explained, were "detrimental robots." The teros were "integrative robots." But neither deros nor teros were actually robots. As with much else, Shaver was vague on the question of why these beings were called robots at all. They were the remnants of a super race of giants, the Atlans and the Titans, the rest of whom had fled Earth in spaceships 12,000 years ago when the sun began emitting deadly radiation. Those few remaining had retreated to vast caves; during the centuries many degenerated into sadistic idiots (deros) and used the advanced Atlan technology to wreak havoc on the good guys, the teros, who had managed to keep their brains and dignity intact. Other Atlans either stayed on or returned to the Earth's surface, adjusted to the new solar radiation, and became our ancestors. To this day deros kidnap and torture surface humans, shoot airplanes out of the sky, and commit other evil acts.

Ray Palmer, editor of Amazing Stories, introduced the magazine to articles on "true mysteries." Even before 1947, contributors to Amazing Stones speculated about extraterrestrial visitation, drawing on the writings of Charles Fort.
Mary Evans Picture Library

­These lurid­ fantasies enthralled readers of two popular pulp science-fiction magazines, Amazing Stories and Fantastic Adventures, between 1944 and 1948. Just about anyone else would have pegged Shaver as a complete nut case and paid no more attention, but he intrigued senior editor Ray Palmer, who snatched Shaver's initial letter out of a wastebasket into which another editor had tossed it with a sneering remark about "crackpots." Soon, as the most intense controversy in the history of science-fiction fandom swirled around him, Palmer vigorously promoted the "Shaver mystery." To many readers it was lunatic nonsense. To others it was the secret of the ages.

Believers who sought "evidence" for dero activity filled the magazines' pages with material gleaned from Charles Fort's writings and from occult lore. Some of this concerned reports of strange ships in the Earth's atmosphere. In fact, the June 1947 issue of Amazing Stories featured an article on mysterious flying objects that it linked to extraterrestrial visitation. The magazine was on the newsstands when the K­enneth Arnold sighting brought "flying saucers" into world consciousness.

The Shaver episode, which started just before the UFO age and faded from all but fringe view after its first year, set a standard for tall tales that others would have to scramble to match. Some proved up to the challenge.­

Could the power of a neutron star be harnessed?
Could a Galactic Civilization Survive the End of the Universe?
Neptune: An Ice Giant With Supersonic Winds