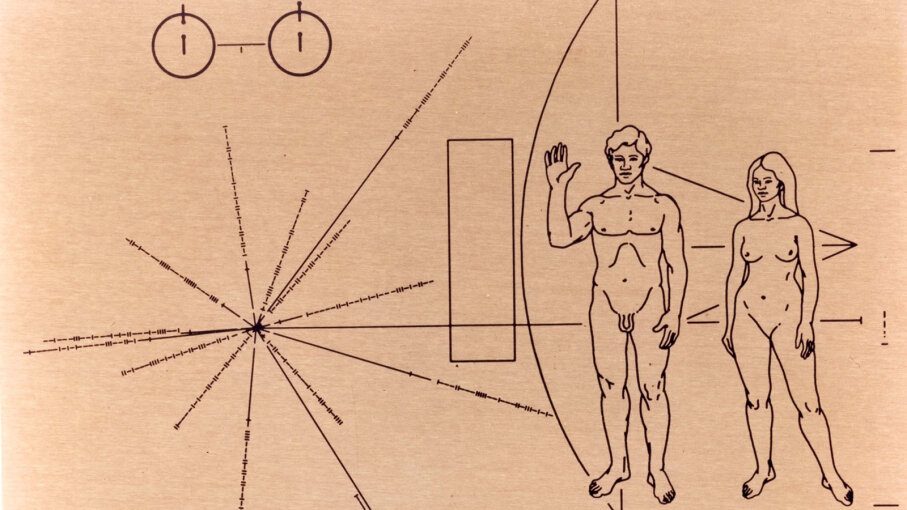 This gold-anodized aluminum plaque was attached to the Pioneer 10 spacecraft before it was launched into space on March 2, 1972. Scientists Carl and Linda Sagan and Frank Drake designed the plaque that was attached to Pioneer 10 to communicate with extraterrestrial beings. (Note: Due to size limitations, the entire plaque is not pictured here.) NASA/Getty Images

One of the biggest voices in the search for extraterrestrial intelligence, or SETI, once wrote that humans should be prepared to deal not just with aliens, but also with their artificial intelligence. Seth Shostak, senior astronomer for the SETI Institute, based his argument on watching us create both basic AI and cloud computing technology and sending robots to explore places we currently can't go. If we can do that, why couldn't an alien species do something similar?

The communication part is where it gets tricky. The prospect of getting aliens to understand what we're saying is hard enough. What chance would an alien machine have? After all, whatever signals we send might seem based on immutable laws of math to most of us, but they'd be arbitrary to an extraterrestrial mind, organic or synthetic. For instance, the fact that we divide information into bits and bytes, that each byte contains eight bits, and there are 1024 bytes in a kilobyte are consequences of computing being adjusted to better handle certain arbitrary communication protocols. So, while we could imagine beaming pulses that are neatly decoded into greetings and instructions for alien probes, how do we know that these machines could understand our Earth-centric standards?

Shostak says we shouldn't worry about that. An alien machine could do what we do when we're trying to understand a different language. They could parse it for distinct patterns, notice repetitions and conclude that what they're receiving is an intelligent signal.

"If you just said lots of things," he explains, "and no matter what is at the other end, if it's an intelligent machine, then it can certainly go through all that information and pick out the redundancies. Even if it's little gray guys with big eyeballs, they probably have some big computers and so they could do the same thing with their computers."

In fact, he argues that trying to send a large volume of data is a more efficient way for aliens to understand our language, more efficient than signals showing that we understand the laws of mathematics. Faced with vast amounts of data, alien machinery could build up a large list of nouns and learn to associate them with certain images.

"If they were parsing [the digital version of] The Library of Congress, they would quickly learn that the name for this square thing with four wheels is 'automobile,'" he says. "What will be hard is understanding verbs, but they could certainly pull out sequences and try to figure them out, kind of how you learn to read actually, although you'd already know the language."

Of course, there's only so far we can broadcast our radio signals, and there are only so many targets at which we can aim our lasers. But let's say that at some point alien machines do encounter our probes. It's very unlikely the two devices will be able to successfully communicate because in a few hundred years the electronics on our probes would fail thanks to wear and tear and the radiation of outer space. It's also statistically unlikely they'd be quickly found by an alien spaceship. However, says Shostak, that doesn't mean there wouldn't be a lot for aliens to learn from the discovery, starting with analyzing the probes' levels of technology.

"Say something happened to Christopher Columbus' ships and they all sank except maybe one," he elaborates. "So imagine that Santa Maria washes up on the shore and Native Americans go down and take a look at this ship. What can they tell about the culture that was on the other side of the ocean that launched this ship? Well, they have metal, and they have big pieces of cloth that serve some function they can probably figure out what the purpose of it was. They'd see a rudder and certainly know what a rudder was. They could certainly learn a lot from just the technology about the relative technical sophistication of the culture at the other end."

Each of the two Voyager spacecraft launched in 1977 carry one of the 12-inch gold-plated phonograph records pictured here, replete with images and sounds from Earth.
NASA

And while Shostak says aliens are probably never going to run into the Voyager or the Pioneer probes, they'd be intrigued with the technology we put into them, more intrigued than with any plaques adorning said probes. If anything, he argues that equipping probes for first contact should be done with as much data as possible and allow alien machines to figure out the rest.

In other words, aliens will understand our communication protocols as long as we're consistent about the ones we send and we make sure to give them a lot of data so they can decipher that they're dealing with a language. How much time and energy they'll invest in their process will likely be determined by their priorities and the limitations of their machines' programming, but it's unlikely that alien machines and their handlers won't at least recognize that they've made first contact with something out there.

Now That's Interesting
Shostak also suggests using a kind of interstellar braille on crystals that can survive for extremely long periods, "sort of like a CD designed for the rigors of space" that can still be read by scanners since an alien machine would be able to notice the patterns of redundancies and start the process of deciphering what we have to teach it.