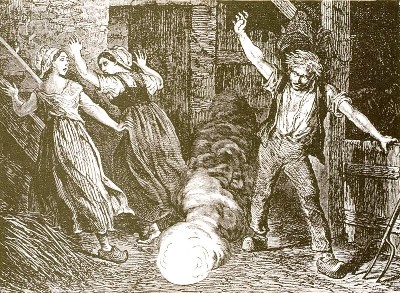 Ball lightning, such as this representation seen during a storm in France in 1845, is a rare and poorly understood natural phenomenon that may explain some reports of small, luminous UFOs.
Fortean Picture Library

On November 2, 1957, the Soviet Union launched Sputnik II into orbit. Within hours, coincidentally or otherwise, a UFO wave erupted in the United States. At first the wave appeared to be concentrated in a small backwater area of west Texas, where a series of remarkable UFO encounters took place.

The sheriff's office in the town of Levelland scoffed that evening when a frightened man called to report that he and a friend, driving on a country highway four miles west of town, had seen a 200-foot-long "rocket" rise up from a field and rush toward their truck. Terrified of an imminent collision, the two flew out of the cab and hurled themselves into the ditch. As the UFO passed just above the truck, rocking it with a blast as loud as thunder, the vehicle's engine died and its lights went out, only to resume a few seconds later when the mysterious object disappeared from view.

An hour later, another caller recounted his experience with an identical UFO that had also interfered with the electric functioning of his car. The scoffing stopped, and sheriff's officers soon found themselves handling comparable stories from frightened observers who had seen a giant, light-and engine-killing UFO at locations west, east, and north of Levelland. At 1:30 A.M. Sheriff Weir Clem and a deputy saw the UFO themselves. A few minutes later Ray Jones, Levelland's fire marshal, experienced motor difficulty when the same or a similar phenomenon was in view.

The official Air Force explanation: "ball lightning." But ball lightning never exceeds more than a few feet in diameter and is usually only inches around. Project Blue Book claimed an electrical storm was in progress during the sightings; there was no storm. By 1957 Project Blue Book's "investigations" were perfunctory at best. Even its chief scientific adviser, astronomer J. Allen Hynek, would later remark on the "absence of evidence that ball lightning can stop cars and put out headlights."