Quiz Corner
Test your knowledge of the space shuttle with our Space Shuttle Quiz.

­Launching a spacecraft into space is one thing. B­ringing it back is another.

Spacecraft re-entry is tricky business for several reasons. When an object enters the Earth's atmosphere, it experiences a few forces, including gravity and drag. Gravity will naturally pull an object back to earth. But gravity alone would cause the object to fall dangerously fast. Luckily, the Earth's atmosphere contains particles of air. As the object falls, it hits and rubs against these particles, creating friction. This friction causes the object to experience drag, or air resistance, which slows the object down to a safer entry speed. Read more about these factors in "What if I threw a penny off the Empire State Building?" 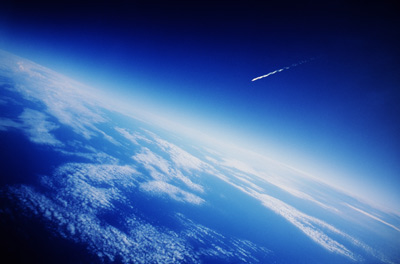 This friction is a mixed blessing, however. Although it causes drag, it also causes intense heat. Specifically, shuttles face intense temperatures of about 3000 degrees Fahrenheit (about 1649 degrees Celsius) [source: Hammond]. Blunt-bodydesign helps alleviate the heat problem. When an object -- with blunt-shaped surface facing down -- comes back to Earth, the blunt shape creates a shock wave in front of the vehicle. That shock wave keeps the heat at a distance from the object. At the same time, the blunt shape also slows the object's fall [source: NASA]. The Apollo program, which moved several manned ships back and forth from space during the 1960s and 1970s, coated the command module with special ablative material that burned up upon re-entry, absorbing heat.

Unlike the Apollo vehicles, which were built for one-time use, space shuttles are reusable launch vehicles (RLVs). So instead of merely using ablative material, they must incorporate durable insulation. On the next page, we'll delve more deeply into the modern re-entry process for shuttles.

Re-entering Earth is all about attitudecontrol. And, no, this doesn't mean astronauts need to keep a positive attitude (although that's always helpful). Rather, it refers to the angle at which the spacecraft flies. Here's an overview of a shuttle descent: 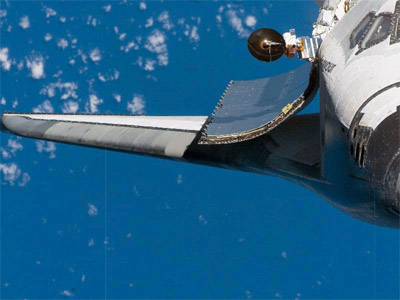