Submarines are incredible pieces of technology. Not so long ago, a naval force worked entirely above the water; with the addition of the s­ubmarine to the standard naval arsenal, the world below the surface became a battleground as well.

The adaptations and inventions that allow sailors to not only fight a battle, but also live for months or even years underwater are some of the most brilliant developments in military history.

In this article, you will see how a submarine dives and surfaces in the water, how life support is maintained, how the submarine gets its power, how a submarine finds its way in the deep ocean and how submarines might be rescued.

­A submarine or a ship can float because the weight of water that it displaces is equal to the­ weight of the ship. This displacement of water creates an upward force called the buoyant force and acts opposite to gravity, which would pull the ship down. Unlike a ship, a submarine can control its buoyancy, thus allowing it to sink and surface at will.

There are three main problems of life support in the closed environment of submarine:

The air we breathe is made up of significant quantities of four gases:

When we breathe in air, our bodies consume its oxygen and convert it to carbon dioxide. Exhaled air contains about 4.5 percent carbon dioxide. Our bodies do not do anything with nitrogen or argon. A submarine is a sealed container that contains people and a limited supply of air. There are three things that must happen in order to keep air in a submarine breathable:

Oxygen is supplied either from pressurized tanks, an oxygen generator (which can form oxygen from the electrolysis of water) or some sort of "oxygen canister" that releases oxygen by a very hot chemical reaction. (You may remember these canisters because of their problems on the MIR space station -- see this page for details). Oxygen is either released continuously by a computerized system that senses the percentage of oxygen in the air, or it is released in batches periodically through the day.

The moisture can be removed by a dehumidifier or by chemicals. This prevents it from condensing on the walls and equipment inside the ship.

In addition, other gases such as carbon monoxide or hydrogen, which are generated by equipment and cigarette smoke, can be removed by burners. Finally, filters are used to remove particulates, dirt and dust from the air.

Most submarines have a distillation apparatus that can take in seawater and produce fresh water. The distillation plant heats the seawater to water vapor, which removes the salts, and then cools the water vapor into a collecting tank of fresh water. The distillation plant on some submarines can produce 10,000 to 40,000 gallons (38,000 - 150,000 liters) of fresh water per day. This water is used mainly for cooling electronic equipment (such as computers and navigation equipment) and for supporting the crew (for example, drinking, cooking and personal hygiene).

The temperature of the ocean surrounding the submarine is typically 39 degrees Fahrenheit (4 degrees Celsius). The metal of the submarine conducts internal heat to the surrounding water. So, submarines must be electrically heated to maintain a comfortable temperature for the crew. The electrical power for the heaters comes from the nuclear reactor, diesel engine, or batteries (emergency).

­Nuclear submarines use nuclear reactors, steam turbines and reduction ge­aring to drive the main propeller shaft, which provides the forward and reverse thrust in the water (an electric motor drives the same shaft when docking or in an emergency).

A diesel submarine is a very good example of a hybrid vehicle. Most diesel subs have two or more diesel engines. The diesel engines can run propellers or they can run generators that recharge a very large battery bank. Or they can work in combination, one engine driving a propeller and the other driving a generator. The sub must surface (or cruise just below the surface using a snorkel) to run the diesel engines. Once the batteries are fully charged, the sub can head underwater. The batteries power electric motors driving the propellers. Battery operation is the only way a diesel sub can actually submerge. The limits of battery technology severely constrain the amount of time a diesel sub can stay underwater.

Because of these limitations of batteries, it was recognized that nuclear power in a submarine provided a huge benefit. Nuclear generators need no oxygen, so a nuclear sub can stay underwater for weeks at a time. Also, because nuclear fuel lasts much longer than diesel fuel (years), a nuclear submarine does not have to come to the surface or to a port to refuel and can stay at sea longer.

Nuclear subs and aircraft carriers are powered by nuclear reactors that are nearly identical to the reactors used in commercial power plants. The reactor produces heat to generate steam to drive a steam turbine. The turbine in a ship directly drives the propellers, as well as electrical generators. The two major differences between commercial reactors and reactors in nuclear ships are:

See How Nuclear Power Works for details on nuclear power and propulsion systems.

­Light does not penetrate very far into the ocean, so submarines must nav­igate through the water virtually blind. However, submarines are equipped with navigational charts and sophisticated navigational equipment. When on the surface, a sophisticated global positioning system (GPS) accurately determines latitude and longitude, but this system cannot work when the submarine is submerged. Underwater, the submarine uses inertial guidance systems (electric, mechanical) that keep track of the ship's motion from a fixed starting point by using gyroscopes. The inertial guidance systems are accurate to 150 hours of operation and must be realigned by other surface-dependent navigational systems (GPS, radio, radar, satellite). With these systems onboard, a submarine can be accurately navigated and be within a hundred feet of its intended course.

To locate a target, a submarine uses active and passive SONAR (sound navigation and ranging). Active sonar emits pulses of sound waves that travel through the water, reflect off the target and return to the ship. By knowing the speed of sound in water and the time for the sound wave to travel to the target and back, the computers can quickly calculate distance between the submarine and the target. Whales, dolphins and bats use the same technique for locating prey (echolocation). Passive sonar involves listening to sounds generated by the target. Sonar systems can also be used to realign inertial navigation systems by identifying known ocean floor features .

­­W­hen a submarine goes down because of a collision with something (such as another vessel, canyon wall or mine) or an onboard explosion, the crew will radio a distress call or launch a buoy that will transmit a distress call and the submarine's location. Depending upon the circumstances of the disaster, the nuclear reactors will shut down and the submarine may be on battery power alone.

If this is the case, then the crew of the submarine have four primary dangers facing them: ­

­Rescue attempts from the surface must occur quickly, usually within 48 hours of the accident. Attempts will typically involve trying to get some type of rescue vehicle down to remove the crew, or to attach some type of device to raise the submarine from the sea floor. Rescue vehicles include mini-submarines called Deep-Submergence Rescue Vehicles (DSRV) and diving bells.

The DSRV can travel independently to the downed submarine, latch onto the submarine over a hatch (escape trunk), create an airtight seal so that the hatch can be opened, and load up to 24 crew members. A diving bell is typically lowered from a support ship down to the submarine, where a similar operation occurs.

For an amazing, in-depth look at nuclear subs, see the book "Submarine: A Guided Tour Inside a Nuclear Warship" by Tom Clancy. 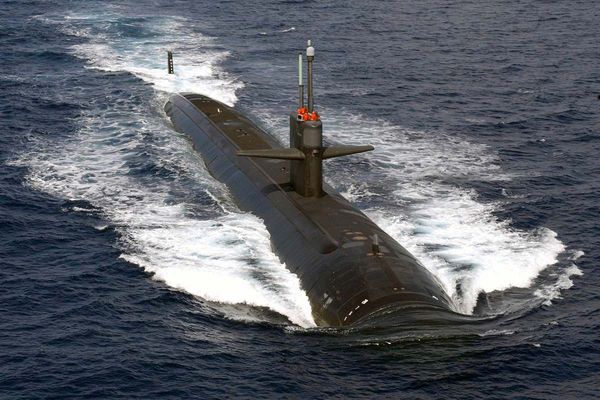 Up Next
Would a cell phone work on a submerged submarine?
Explore More 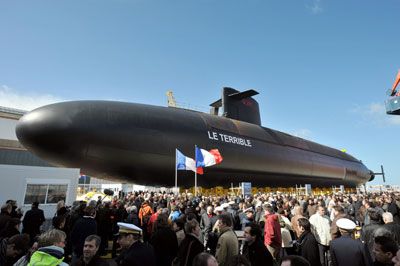 You May Like
How Nuclear Submarines Work
Explore More 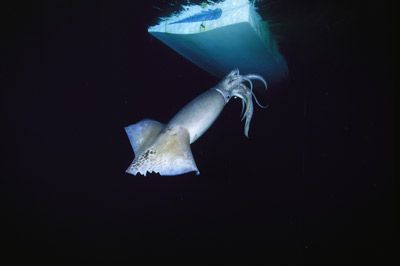 Keep Reading
Could a squid take down a submarine?
Explore More