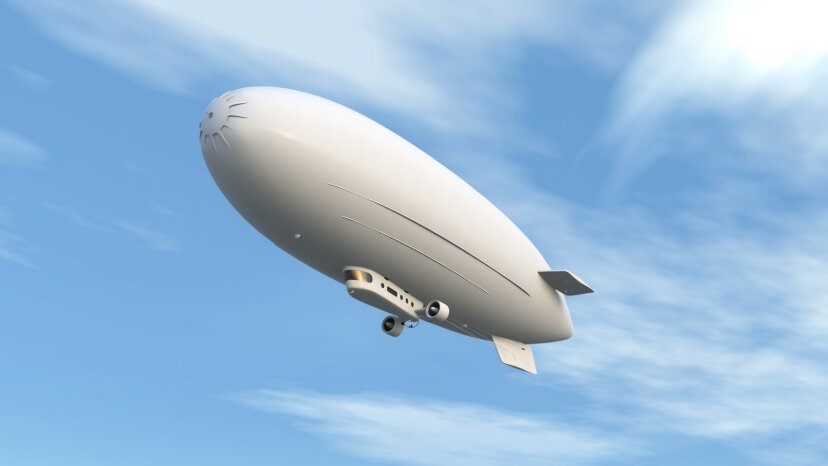 Have you seen one? Luismmolina / Getty Images

You've probably seen a Goodyear blimp providing TV coverage to a sporting event, such as a football game or golf tournament. Blimps are a type of lighter-than-air (LTA) craft called an airship. Like a hot air balloon, blimps use a gas to generate lift. But unlike a hot air balloon, blimps can move forward through the air under their own power, like airplanes. T­hey can hover like helicopters, travel in all kinds of weather and stay aloft for days. In this edition of HowStuffWorks, we will show you how these fascinating vehicles work. 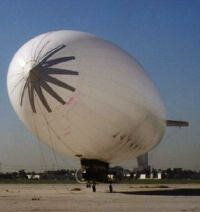 Unlike a balloon, a blimp has a shape and structure that enable it to fly and maneuver. The following parts allow it to do this:

Move mouse over each part to view its location.

We'll discuss each of these parts in the following sections.

The envelope is the large bag that holds the helium gas. The envelope is generally cigar-shaped, for aerodynamic purposes, and made of a durable, airtight, lightweight fabric (polyester composites) that is much like the fabric of a space suit. In fact, many envelopes are made by ILC Dover Corporation, the company that makes spacesuits for NASA.

The nose cone battens are supports that radiate from the tip of the blimp. They stiffen the front of the blimp so that it is not damaged when it is moored to the mooring mast. They also give the nose an aerodynamic shape, and prevent it from pushing in as the blimp travels forward. In addition to the battens, the mooring hooks are located in the nose of the blimp.

Ballonets are air-filled bags that are located inside the envelope. The blimp has two ballonets, one fore and one aft. The ballonets are similar to the ballast tanks of a submarine. Because air is heavier than helium, the ballonets are deflated or inflated with air to make the blimp ascend or descend, respectively. They are also used to control the trim, or levelness, of the blimp.

The flight control surfaces are stiff, movable parts of the blimp that are mounted to the tail. They consist of the rudder and elevators. The rudder is used to steer the blimp to the starboard or port directions (yaw axis). The elevators are used to control the angle of ascent or descent (pitch axis) of the blimp. The flight control surfaces are operated by the pilot as he/she flies the blimp, and can be arranged in a "+" or "x" configuration.

The two engines on the blimp provide the thrust necessary to move ahead. The engines are turbo-propeller airplane engines that use gasoline fuel and are cooled by air. The engines can generate several hundred horsepower, depending upon the particular blimp. They are located on either side of the gondola. With the engines, blimps can cruise around 30 to 70 mph (48 to 113 kph).

The pilots must be able to vent air from the ballonets as well as add it. This is accomplished by air valves that are located on each ballonet. There are four valves -- two fore, two aft.

The pressure of the helium in the envelope is adjusted by changing the amount of air in the ballonets. Normally, blimp pilots do not have to add or remove helium from the envelope. However, there is a helium valve on the envelope that can be used to vent helium should the helium pressure exceed its maximum safe limit. The valve can be opened manually or automatically.

The gondola holds the passengers and crew. It is enclosed, and holds two pilots and up to 12 crew, depending upon the type of blimp (Goodyear's Eagle and Stars & Stripes each hold two pilots and six passengers). Some gondolas have specialized equipment, such as a camera, attached to them.

The control panels used by the pilots include the following:

Blimp pilots are FAA-certified for lighter-than-air (LTA) craft. Goodyear's pilots undergo a comprehensive training program prior to FAA certification. In addition to piloting, Goodyear's pilots also serve as ground-support crew, including electronics technicians, mechanics, riggers and administrative personnel. A ground crew follows the blimp wherever it goes, bringing several support vehicles, including a bus that serves as the administrative office, a tractor-trailer that serves as an electrical/mechanical shop, and a van that is the command car/utility vehicle.

Some blimps (like Goodyear) are equipped with electric lights for nighttime advertising. In the Goodyear blimp, the night signs consist of a matrix of red, green and blue light-emitting diodes (LEDs). The intensities of the LEDs can be adjusted to create various colors. The messages are programmed in with a small laptop computer that is carried aboard.

Now that we have seen all of the parts of a blimp, let's look at how it flies!

Blimp History tells you how, why, where and when blimps were first developed.

How a Blimp Flies 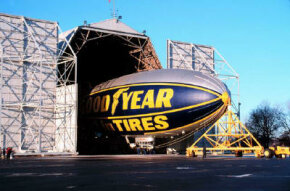 The Spirit of Goodyear coming out of its hangar at Wingfoot Lake Airship Base outside of Akron, Ohio
Photo courtesy Goodyear Tire & Rubber Company

Airships are called lighter-than-air (LTA) craft because to generate lift, they use gases that are lighter than air. The most common gas in use today is helium, which has a lifting capacity of 0.064 lb/ft3 (1.02 kg/m3). Hydrogen was commonly used in the early days of airships because it was even lighter, with a lifting capacity of 0.070 lb/ft3 (1.1 kg/m3) and was easier and cheaper to acquire than helium. However, the Hindenburg disaster ended the use of hydrogen in airships because hydrogen burns so easily. Helium, on the other hand, is not flammable.

Click on the button to see how a blimp ascends and descends.

A blimp or airship controls its buoyancy in the air much like a submarine does in the water. The ballonets act like ballast tanks holding "heavy" air. When the blimp takes off, the pilot vents air from the ballonets through the air valves. The helium makes the blimp positively buoyant in the surrounding air, so the blimp rises. The pilot throttles the engine and adjusts the elevators to angle the blimp into the wind. The cone shape of the blimp also helps to generate lift.

As the blimp rises, outside air pressure decreases and the helium in the envelope expands. The pilots then pump air into the ballonets to maintain pressure against the helium. Adding air makes the blimp heavier, so to maintain a steady cruising altitude, the pilots must balance the air-pressure with the helium-pressure to create neutral buoyancy. To level the blimp in flight, the air pressures between the fore and aft ballonets are adjusted. Blimps can cruise at altitudes of anywhere from 1,000 to 7,000 ft (305 to 2135 m). The engines provide forward and reverse thrust while the rudder is used to steer.

To descend, the pilots fill the ballonets with air. This increases the density of the blimp, making it negatively buoyant so that it descends. Again, the elevators are adjusted to control the angle of descent.

When not in use, blimps are moored to a mooring mast that is either out in the open or in a hangar. To move the blimp into or out of its hangar, a tractor tows the mooring mast with the blimp attached to it.

Uses of Blimps and Airships 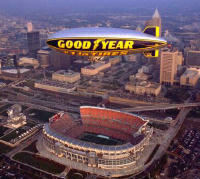 Because gas provides the lift in an airship or blimp, rather than a wing with an engine as in an airplane, airships can fly and hover without expending fuel or energy. Furthermore, airships can stay aloft anywhere from hours to days -- much longer than airplanes or helicopters. These properties make blimps ideal for such uses as covering sporting events, advertising and some research, like scouting for whales.

Recently, there has been renewed interest in using rigid airships for lifting and/or transporting heavy cargo loads, like ships, tanks and oil rigs, for military and civilian purposes. Modern airships, such as the Zeppelin NT and CargoLifter, use lightweight, carbon-composite frames that allow them to be huge, light and structurally sound. In addition to hauling cargo, airships may once again be used for tourism. So, the sight of a large airship moving across the sky may become more common in the near future. 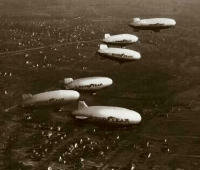 In 1783, two French brothers, Jacques Etienne and Joseph Michel Montgolfier, invented the hot-air balloon and sent one to an altitude of 6,000 ft (1,800 m). Later that year, the French physicist Jean Pilatre de Rozier made the first manned balloon flight. While balloons could travel to high elevations, they could not travel on their own propulsion and were at the mercy of the prevailing winds. The shape of the balloon was determined by the pressure of the air or gas (such as hydrogen or helium).

The rigid airship had a metal framework -- 420 ft (123 m) in length, 28 ft (12 m) in diameter -- containing hydrogen-gas-filled rubber bags. The first Zeppelin had tail fins and rudders, and was powered by internal combustion engines. It carried five people to an altitude of 1,300 ft (396 m) and flew a distance of 3.75 mi (6 km). Several models of Zeppelins were built in the early 1900s. These vehicles were used for military and civilian purposes, including transatlantic travel. The most famous Zeppelin was the Hindenburg, which was destroyed by a fire in 1937 while landing at Lakehurst, New Jersey. See Fall of the Hindenburg to learn about the ship and the crash.

In 1925, Goodyear Tire & Rubber Company began building airships of the blimp design. These aircraft were used for advertising and military purposes (such as surveillance and anti-submarine warfare) throughout World War II. In 1962, the U.S. military stopped using blimps in their operations. Today, blimps are used mainly for advertising, TV coverage, tourism and some research purposes. However, the airship is coming back.

For more information on airships and related topics, check out the links on the next page.

All airships have solid gondolas, engine-powered propellers and solid tailfins.