How a Blimp Flies 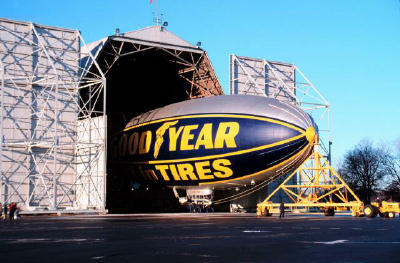 The Spirit of Goodyear coming out of its hangar at Wingfoot Lake Airship Base outside of Akron, Ohio
Photo courtesy Goodyear Tire & Rubber Company

Airships are called lighter-than-air (LTA) craft because to generate lift, they use gases that are lighter than air. The most common gas in use today is helium, which has a lifting capacity of 0.064 lb/ft3 (1.02 kg/m3). Hydrogen was commonly used in the early days of airships because it was even lighter, with a lifting capacity of 0.070 lb/ft3 (1.1 kg/m3) and was easier and cheaper to acquire than helium. However, the Hindenburg disaster ended the use of hydrogen in airships because hydrogen burns so easily. Helium, on the other hand, is not flammable.

Click on the button to see how a blimp ascends and descends.

A blimp or airship controls its buoyancy in the air much like a submarine does in the water. The ballonets act like ballast tanks holding "heavy" air. When the blimp takes off, the pilot vents air from the ballonets through the air valves. The helium makes the blimp positively buoyant in the surrounding air, so the blimp rises. The pilot throttles the engine and adjusts the elevators to angle the blimp into the wind. The cone shape of the blimp also helps to generate lift.

As the blimp rises, outside air pressure decreases and the helium in the envelope expands. The pilots then pump air into the ballonets to maintain pressure against the helium. Adding air makes the blimp heavier, so to maintain a steady cruising altitude, the pilots must balance the air-pressure with the helium-pressure to create neutral buoyancy. To level the blimp in flight, the air pressures between the fore and aft ballonets are adjusted. Blimps can cruise at altitudes of anywhere from 1,000 to 7,000 ft (305 to 2135 m). The engines provide forward and reverse thrust while the rudder is used to steer.

To descend, the pilots fill the ballonets with air. This increases the density of the blimp, making it negatively buoyant so that it descends. Again, the elevators are adjusted to control the angle of descent.

When not in use, blimps are moored to a mooring mast that is either out in the open or in a hangar. To move the blimp into or out of its hangar, a tractor tows the mooring mast with the blimp attached to it.