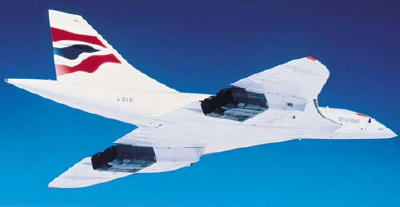 Concorde in flight: Note that the engines are attached directly underneath the wing without struts.
Photo courtesy British Airways

The engines on the Concorde provided the thrust necessary for takeoff, cruising and landing. The Concorde had four Rolls Royce/Snecma Olympus 593 turbo jet engines. Each engine generated 18.7 tons (180 kN) of thrust. Together, the four engines burned 6,771 gallons (25,629 liters) of fuel per hour.

The location and type of engines on the Concorde's was different from on other jets.

Airbus 320 in-flight: Note that the engines are attached underneath the wing with struts.
Photo courtesy British Airways

The Concorde's engines were attached directly to the underside of the wing without engine struts. This design reduced air turbulence and makes for a more stable engine. At supersonic speeds, engine struts would be overstressed and likely to break.

The Concorde's engines used afterburners to gain additional thrust to reach supersonic speeds. Afterburners mix additional fuel with the exhaust gases from the primary combustion chamber and burn it to get more thrust. Afterburners are typically used on supersonic military jets.