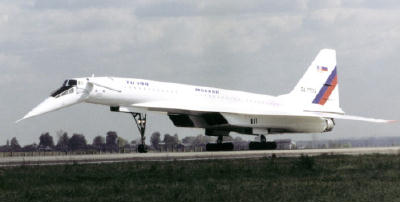 In 1962, the British and French governments signed an agreement to develop a supersonic transport aircraft (SST). The plane was built jointly by British Aerospace (BAe) and Aerospatiale. Two prototypes were built, and the first flight took place in 1969. A total of 20 Concordes were made. The planes were flown by British Airways and Air France. The 30th anniversary of the Concorde took place on March 2, 1999.

The American and Soviet governments also had plans to build an SST. In the United States, Boeing contracted to build a prototype. However, the program was killed in 1971 after a federal report stated that it would be too costly to continue. The Russians built an SST similar in design to the Concorde, called the Tupolev Tu -144, nicknamed the "Konkordski."

In 1973, a Tu -144 crashed at the Paris Air Show. The crash was probably caused by pilot error. However, the Tu -144's use for passenger flights was suspended (see Nova: Supersonic Spies for details on the Tu -144 and events surrounding the crash). The Tu -144 was modified and used for air-mail service. Several Tu -144s have been donated to museums, and one is being used now in a joint aeronautic project between the Russian government and NASA for supersonic-flight research.

A flight engineer installs a Kevlar liner to a Concorde's fuel tank for its return to flight.
Photo courtesy British Airways

At the time of its decommissioning, the Concorde was the only SST in commercial service. However, the Concorde had its share of problems. On July 25, 2000, an Air France Concorde flight en route from Paris to New York crashed] just moments after takeoff, killing all passengers and crew as well as several people on the ground. Investigations into the crash have centered on a loose strip of metal that was lying on the runway. It is believed that the metal caused one of the Concorde's tires to blow out. Debris from the tire was sucked into the engine and/or fuel tank and caused a fire on the portside (left) engine, yielding 200-foot-long flames. The aircraft stalled, tumbled, and crashed on a hotel in nearby Gonesse. Both British Airways and Air France immediately grounded their Concorde fleets.

Now that we know some of the history of the Concorde and other SSTs, let's look at the details of these aircraft.