A Trip on the Concorde 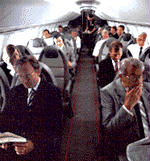 Imagine traveling back in time to take a trip on the Concorde. You arrive at London Heathrow airport for the 10:30 a.m. flight, check in, check your luggage and wait in the Concorde Lounge of British Airways. When it comes time, you board the airplane. The Concorde can hold 100 passengers, with two seats on each side of the aisle. The crew consists of the pilot, co-pilot, flight engineer and six cabin crew members. You sit in your seat and await the takeoff.

As the plane taxis to the runway and begins takeoff; its nose is down. The engines fire with 38,000 pounds of thrust, and you go from zero to 225 mph (362 kph) in just three seconds -- so fast that you are pushed back into your seat by the acceleration. The noise of the engines roars through the cabin. You quickly reach your cruising altitude (11.3 mi/18.3 km) and pass the sound barrier. The plane's nose is now up. A sign inside the cabin displays the Mach number continuously. As you look out the window, you can see the Earth's curvature. You are at the edge of space between the stratosphere and the ionosphere -- you can see the colors of the stratosphere!

While you are in flight, you can enjoy a gourmet meal with wine or champagne. The flight does not take long, only about three-and-a-half hours. As you approach New York, the plane slows down, descends and the plane's nose comes down. You touch down in New York at 9:30 a.m., one hour before you left London.

More than 2.5 million people have flown on the Concorde. The cost of your Concorde flight from London to New York is about $5,100 (£3,521 British) one way!