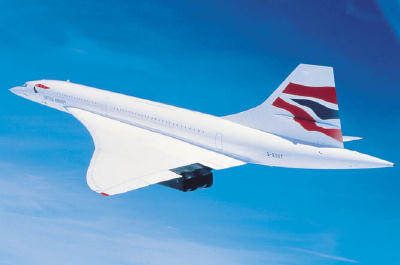 As any aircraft approaches the speed of sound (1100 ft/s, 343 m/s), the air pressure builds up in front of the aircraft, forming a "wall" of air. To punch through that wall of air, planes must be streamlined. To streamline the Concorde, the following designs had to be implemented:

A Boeing 747 in flight: Note the thin, rectangular wing structure and horizontal stabilizer on the tail.
Photo courtesy British Airways

The Concorde had a longer, needle-shaped nose compared to most commercial jets. The nose helped penetrate the air, and can be tilted down upon takeoff and landing (13 degrees) so that the pilots can see the runway. (Delta-winged aircraft have a steeper angle of attack during takeoff and landing than other types of aircraft.) Also, the Concorde's nose had a visor to protect the windshield when flying at supersonic speeds.

As mentioned above, because the delta wing provided stability to the aircraft, the Concorde did not require a horizontal stabilizer on the tail like most other aircraft.

These designs in the body and wings of the aircraft allowed it to move easily through the air at high speed.