Anatomy of a Canine Combatant 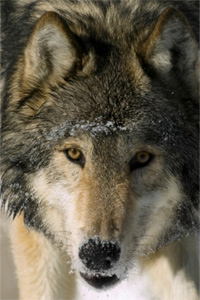 It's a little hard to see the resemblance between this gray wolf and, say, a poodle, but it's there -- somewhere.
Daniel J. Cox/Getty Images

The domestic dog -- Canis lupus familiaris -- bears only a vague resemblance to its wolflike ancestor. It's hard to imagine that Chihuahuas and pit bulls can call themselves relatives. But despite the dizzying array of dog breeds, every Fido on Earth possesses the spirit and basic morphology of an animal similar to the gray wolves still roaming the world today. Let's dive under the hood to see what makes the dog design so special.

Everything starts with the canine skeleton, which evolution has shaped for running and leaping. The rear legs are rigid and sturdy, the front legs loose and flexible. Unlike humans, dogs lack a collarbone. Its absence increases how far the front limbs can extend relative to the torso, enabling a much longer stride. Look at the gallop of a greyhound, and you'll see evidence of this built-for-running skeleton. You'll also see that each leg of the dog ends in a small, compact foot with four toes armed with claws. Dogs walk on these toes and, like all speedy mammals, can accelerate rapidly by remaining on the balls of their feet. A fifth claw, the dewclaw, is the vestige of a thumb, which may or may not touch the ground, depending on the breed.

All of the major organs lie within the protective shell of the bones and muscles. Dogs possess the same bodily systems as humans, though some are tweaked for performance. The cardiovascular system, for example, supports both sprinting and endurance. Many breeds have running characteristics reminiscent of their gray wolf cousins, which can reach speeds up to 34 to 43 miles per hour (55 to 70 kilometers per hour) for short bursts, but can also travel up to 124 miles (200 kilometers) a day at a pace of 5 miles per hour (8 kilometers per hour) [source: Dewey].

Even more impressive are the canine sense organs, especially the nose and ears. A dog's nose contains 225 million olfactory receptors, making it a very sensitive and nuanced sensory receptor [source: Frankel]. Humans, by comparison, boast a meager 5 million olfactory receptors [source: Correa]. Rescue dogs and other long-nosed breeds are able to identify people accurately even after a considerable passage of time, while hunting dogs can distinguish one variety of bird from another. Dogs also possess an acute sense of hearing. Their ears have an audible range up to 35,000 hertz, whereas humans max out at only 20,000 hertz [source: Vanacore]. Dogs can even move their ears independently, which helps them to focus sounds

These anatomical traits alone make dogs ideal military participants. Throw in their loyalty and their desire to please, and it's easy to see why they're in high demand on the battlefield today. Surprisingly, the U.S. was slow to recognize the benefits of canine combatants, as we'll see next.