Dogs Trot From the Home Front to the Battlefront 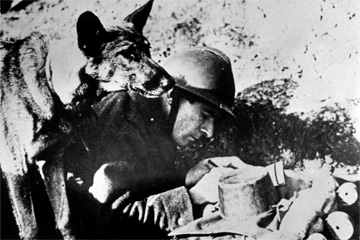 1939: A French officer scribbles a message while a dog stands by ready to deliver it. The dogs acted as couriers to scattered posts in the French zone.
Photo by Topical Press Agency/Getty Images

Humans domesticated dogs 12,000 years ago and have, ever since, involved the animals in their activities and pursuits, including war. The ancient Persians, Greeks, Assyrians and Babylonians all used dogs to great effect against their enemies.

Fast-forward a bunch of centuries to the American colonies, Benjamin Franklin is trying to garner support for building a canine military corps (in all his free time), but no formal program ever takes hold. Throughout the Revolutionary and Civil wars, a small number of family pets made it to the battlefield, and a few made it into the history books. At the Battle of Antietam, September 1862, Capt. Werner Von Bachelle of Company F, 6th Wisconsin Infantry, fought bravely alongside his canine companion, a Newfoundland. When a Confederate bullet killed the captain, his dog stayed by his side until it too succumbed [source: Dawes].

These stories of heroism were touching, but rare. As the United States entered World War I, the military still had no formal war dog program. This stood in stark contrast to nations like Germany, which, by the start of the conflict, had 30,000 dogs serving the military in a variety of roles [source: Fisher]. The European armies used the animals extensively for medical assistance, draft duty and as messengers. In the former situation, dogs roamed the no-man's-land between trenches, searching for wounded soldiers. Upon finding a fallen man, the animal would deliver water and medical supplies; some were even trained to pick up the soldier's helmet and deliver it to his handler, who would dispatch a litter. As draft animals, they carried ammunition and other supplies, often along railroad tracks. And no human soldier could move as efficiently as a dog through the labyrinthine trenches to deliver messages.

When the U.S. entered World War II, military officers, despite seeing the usefulness of dogs in France, remained ambivalent about establishing an official war dog program. But as American forces in the Pacific faced the guerrilla-like tactics of Japanese soldiers, officials finally decided they needed a better way to sniff out the enemy.

In early 1942, a call went out to dog owners to donate quality animals to the cause. Nearly 20,000 dogs "enlisted" in the new War Dog program, or K-9 Corps, traveling from farms and backyards to facilities managed by the Quartermaster Corps [source: Born]. The first of these was located in Front Royal, Va., but others quickly came online. The Marines opened separate facilities at Camp Lejeune, N.C.

Training began in earnest at these reception centers. Most dogs were trained for sentry duty to patrol the coasts and civilian war plants. By early 1944, the emphasis shifted to supplying dogs for combat. Up next, we'll see how war dogs proved their mettle in World War II and beyond.

Not everyone believes dogs should be serving in the military. People for the Ethical Treatment of Animals (PETA) opposes the use of animals for military testing or in combat situations. The organization's Web site points to Department of Defense (DOD) regulations that seem to suggest other alternatives be explored before animals are put in harm's way: "Alternative methods to the use of animals must be considered and used if such alternatives produce scientifically valid or equivalent results to attain the research, education, training, and testing objectives." This language, however, refers specifically to the care and use of laboratory animals in DOD programs. War dogs wouldn't be considered laboratory animals. And even if they were, so far no alternative method exists to sniff out bombs better than a canine nose.