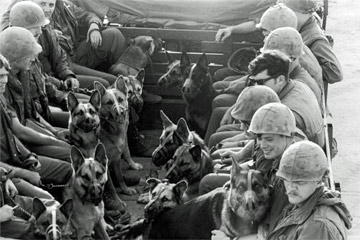 1969: Muzzled sentry dogs and their handlers head back to the base after patrolling the perimeter of a U.S. Naval outpost in Da Nang, Vietnam, during the Vietnam War.
R. A. Elder/Hulton Archive/Getty Images

In March 1944, the War Department activated 15 war dog platoons and dispatched seven to Europe, eight to the Pacific. Most of these dogs were trained as scouts: animals that depended on smell and hearing to detect the enemy. When the dogs and their handlers arrived on Guam in July 1944 -- the first real testing ground of the K-9 Corps concept -- they were greeted with laughs and jeers [source: Done].

That skepticism turned quickly to admiration as troops witnessed the impact dogs could have. The animals could hear stealth attacks long before their human companions, and they became so adept at sniffing out ambushes that dogs took the point of almost every patrol. Commanders also relied on the animals extensively for solo reconnaissance.

The war dogs proved so useful on Guam that, when the battle ended successfully in August, War Department officials decided every Marine platoon should receive its own canines for subsequent island invasions. This enthusiasm continued to the end of the war, encouraging U.S. military officials to extend the War Dog program even after victory had been secured in Europe and the Pacific. In 1948, dog training within the Army transferred to the jurisdiction of Army Field Forces and then, in 1951, to the Military Police Corps.

Through all of this change, dogs continued to serve with distinction in American conflicts. In the Korean War, the Army used about 1,500 dogs, mostly for sentry duty. This number surged to 4,000 in Vietnam, where intense jungle fighting once again demanded the special skills of scout dogs [source: Born]. Protecting air bases and other military installations was another high priority. In fact, it was a Vietcong raid against the Da Nang air base in July 1965 that prompted Air Force officials to post sentry dogs at all major facilities in Vietnam [source: Lemish].

The dogs serving "in country" for the Air Force completed their basic training at Lackland Air Force Base in San Antonio, Texas. Currently, many of the animals working in Iraq and Afghanistan graduate from the same facilities. Their role, however, has evolved. In 2007, the Marines piloted a program with nine bomb-sniffing dogs after it was demonstrated that canine noses could detect improvised exploding devices, or IEDs, better than even the most advanced technology. Some are even able to detect the scent of explosive devices being carried by suicide bombers moving through a crowded street -- what scientists refer to as a "vapor wake." As a result, the number of dogs sniffing Middle Eastern sand and soil has grown to 350, bringing the total number of dogs on active duty to almost 3,000 [source: Frankel]. One of those animals, sent to detect hidden bombs or hidden terrorists, accompanied the team of Navy SEALs dispatched to kill Osama bin Laden in May 2011.

The concept of a weaponized animal -- strapping a bomb to an animal, then letting the animal deliver the explosive to an enemy target -- seems both cruel and crazy, and yet several countries have experimented with the idea. In the early days of World War II, the U.S. Navy and Marines tried to get free-tailed bats to fly suicide-bombing missions in Japan. Fortunately for the small brown mammals, the tests failed miserably. A troop of Russian dogs was not so lucky. Russian military officials trained these dogs to run underneath German tanks. Once there, the explosives, strapped to the animal's back, would be detonated from a distance. By some accounts, more than 300 anti-tank dogs sacrificed themselves in this manner [source: Graham].