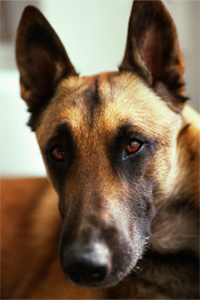 So far, we've talked generally about dogs without focusing on any particular variety, but clearly some of the 400 breeds make better soldiers than others. In ancient armies, commanders preferred mastiff-type dogs because of their size and power. Big dogs, however, weren't the best choice for every mission. In World War I, Jack Russell Terriers -- small dogs with a penchant for hunting rats -- patrolled the trenches to keep vermin away from soldiers and supplies. The YMCA also used small terriers to distribute free cigarettes to the troops. Known as "cigarette dogs," the animals favored soldiers who were about to go "over the top" to face the horrors of enemy machine-gun fire.

By the time World War II started, two breeds had become synonymous with war dog. The first was the German shepherd, a breed developed in the late 1800s in Karlsruhe, Germany, by Capt. Max von Stephanitz and others. Shepherds descended from herding and farm dogs, but selective breeding accentuated the traits that make them such fine military animals -- their high trainability and extreme loyalty and commitment. The other iconic war dog was the Doberman pinscher, a breed that originated in Germany around 1900 and possesses great endurance and speed. More importantly, they are highly intelligent and could absorb and retain training better than other dogs.

U.S. officials trying to establish the fledgling War Dog program were perfectly willing to learn from European success stories. Both German shepherds and Doberman pinschers became mainstays of the American military. In fact, the Marine Corps adopted the Doberman as the official dog of its branch, and the breed saw action throughout the Pacific theater. The U.S. military also used German shepherds extensively, both as scout and sentry dogs. In all, the War Dog program experimented with 30 different breeds throughout World War II. The most useful, in addition to Dobermans and shepherds, were Belgian sheep dogs, farm collies and giant schnauzers [source: Born].

Today, German shepherds remain popular at U.S. military bases around the world. Defense officials also rely heavily on Labrador retrievers and Malinois dogs. Labs earned their reputation as diligent workers on docks and wharves in Newfoundland, where they worked alongside fishermen to pull in nets and catch escaped fish, but their even temperament and trainability make them ideal military working dogs. The Malinois, a breed developed in the Belgian city of Mechelen (Malines in French), looks like a German shepherd, but has a slighter build. Its smaller size makes it no less valuable, however. It's a strong, agile dog with an impeccable work ethic and an obedient disposition.

Of course, having a trainable breed is just the beginning. It still takes a great deal of effort to transform a raw canine recruit into a war-ready soldier. Next, we'll look at what it takes to train the typical war dog.