Training and Deployment of War Dogs 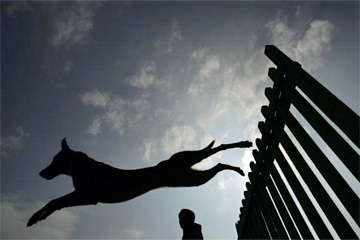 It's one thing to teach a dog to sit, heel and roll over. It's another thing entirely to train an animal not to bark in a combat situation, which might reveal your location to the enemy. And yet war dogs must master the basic commands we drill into our pets before they can move on to more difficult, military-focused tasks. The job of taking a dog on this journey falls to someone known as a handler. At the outbreak of World War II, defense officials didn't necessarily apply a rigorous process when selecting handlers. Some of the earliest canine companions were young men who lived on farms or owned pets before they enlisted [source: Done].

As soon as they were paired up, a dog and his handler would take a week to become familiar with each other. They would hang together in camp, go on hikes and participate in exercises. When the dog felt comfortable with his partner and the new routine, formal obedience training would begin. This phase consisted of teaching dogs to respond to both basic verbal commands and hand signals. Handlers would also work with their animals to suppress barking, which they would need to do in situations calling for combat silence. The final component of basic training was a once-a-week demolition exercise in which dogs were exposed to small arms fire, as well as exploding shells.

Not all dogs rose to the challenges of military life. Of the 19,000 dogs procured between 1942 and 1945, about 45 percent failed to pass basic training [source: Born]. Those that did moved on to more intensive training -- and the opportunity to acquire specialized skills. Many learned how to perform sentry duty. Others learned to become scouts or how to sniff out mines and bombs. Although most were not out-and-out attack dogs, all received instruction in what the military calls "controlled aggressiveness," which requires a dog to attack an enemy soldier upon command and to attack, without command, someone threatening its handler.

Modern war dogs follow a similar regimen. The biggest difference today is the price tag to get a dog prepared for battle. The cost of training a single animal can be $20,000 to $40,000, depending on its specialization [source: Bumiller]. Regardless of its assignment after training, dogs and handlers travel together to their target destination, using the conveyance of choice for their specific branch of the military. For example, U.S. Air Force dogs often jump in tandem with their handlers, while Marine canines are more likely to travel aboard ships and then, to get from ship to shore, aboard amphibious assault vehicles.

With so much time, effort and money spent on war dogs, you can bet the Department of Defense likes to take care of them. Up next, we'll explore how these animals receive care and what happens to them when their military careers come to an end.

Ground troops stationed in Iraq and Afghanistan often carry sophisticated technology. Modern war dogs enjoy nothing less. They receive a range of specialized equipment, including vests that can both protect the animals from bullet and knife wounds and carry additional equipment, such as GPS devices and infrared night-sight cameras. Many dogs also wear "Doggles," special canine goggles that protect their eyes from blowing sand.