From Veterinarians to Veterans 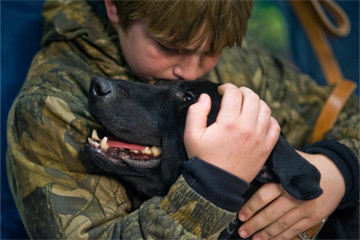 Ernest Hemingway once wrote, "But in modern war there is nothing sweet nor fitting in your dying. You will die like a dog for no good reason." In ancient conflicts, dogs wounded or killed in action probably gave some truth to Hemingway's observation. Even as dogs proved their value in World War II, Korea and Vietnam, some officials viewed them no differently than they viewed weapons, tanks and other inanimate objects. In Vietnam, the Defense Department listed 281 dogs officially killed in action [source: Born]. Those that survived were classified as "surplus equipment" and left behind [source: Frankel].

The U.S. military treats war dogs much differently these days. A unit embraces a canine companion as a fellow warrior that deserves the same attention and respect as any human soldier. This extends to medical care, both on the field and in the hospital. In Iraq and Afghanistan, the biggest threat to dogs is the explosive devices they are trying to sniff out. According to military sources, approximately 20 Labs have been killed by homemade bomb explosions since the Marines started their bomb-sniffing canine program in 2007 [source: Bumiller]. The scorching heat also takes its toll, leading to a dangerous stomach condition known as bloat. A dog's handler, trained in veterinary first aid, can provide some basic assistance in the field. Dogs with serious injuries, however, must take a ride on a medevac helicopter to one of several military veterinary centers located around the world.

Dogs with long-term injuries -- physical or psychological -- might be sent back to the Holland Working Dog Veterinary Hospital in San Antonio, Texas. There, they can receive physical therapy or, if they're suffering from post-traumatic stress disorder, a few sessions with a canine psychologist. Most dogs return to action after their wounds have healed. After four or five deployments, usually when a dog is eight or nine years old, it is eligible for retirement.

After World War II, the Army euthanized its animals for fear that they would be too aggressive for civilian life [source: Done]. The Marines, however, learned that dogs could be "de-trained" and returned to their original owners or put up for adoption. Family homes aren't the only logical destination for war dogs. Many go to work for police departments or security companies. The Military Working Dog Foundation is an organization that can help those interested in adopting a military working dog. It works with law enforcement agencies and individuals to help find a suitable home for canine veterans.

Sometimes, a handler will adopt the dog he trained. Considering the deep bonds that form between the two, this seems like a fitting conclusion for everyone involved.

They say every dog has its day. For some war dogs, those days can be truly remarkable. During World War I, a French dog named Prusco led his handler to more than 100 wounded men. One world war later, in Africa, a mixed-breed American dog by the name of Chips stormed a pillbox containing three Italian soldiers, scaring them into surrender. Chips became the official poster puppy of Dogs for Defense and later received a Purple Heart and a Silver Star for his actions. Dogs can be particularly valiant when their own handlers are hurt. When Taliban sniper fire mortally wounded Pfc. Colton Rusk, his bomb-sniffing dog Eli jumped on top of him to provide both protection and comfort. After the young man's death, officials granted Eli an early retirement so he could return to the U.S. to live with Rusk's family.