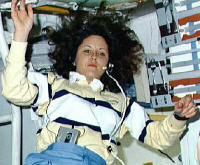 Imagine that you are dressed in your space suit and lying on your back in the flight deck of the space shuttle. You have been on your back in the chair for several hours as the pilots and mission control have gone through the preflight launch preparations. Normally, when you're standing upright, gravity pulls blood downward so it pools in the veins of your legs. However, because you've been lying on your back, the blood is distributed differently through your body, shifting slightly toward your head because your feet are elevated. Your head may feel a little stuffy, much like it does at night when you sleep.

The rocket engines fire and you feel the acceleration. You get pushed back into your seat as the shuttle ascends. You feel heavy as the G-forces of the shuttle's acceleration increase to up to three times normal gravity (some roller coaster rides can achieve this level of acceleration). Your chest feels compressed and you may have some difficulty breathing. In about 8 and a half minutes, you are in outer space, experiencing an entirely different sensation: weightlessness.

Weightlessness is more correctly termed microgravity. You are not actually weightless, because the Earth's gravity is holding you and everything in the shuttle in orbit. You are actually in a state of free-fall, much like jumping from an airplane except that you are moving so fast horizontally (5 miles per second or 8 kilometers per second) that, as you fall, you never touch the ground because the Earth curves away from you. It's like this: When you stand on a bathroom scale, it measures your weight because gravity pulls down on you and the scale. Because the scale is resting on the ground, it pushes up on you with an equal force -- this equal force is your weight. However, if you were to jump off a cliff while standing on a bathroom scale, both you and the scale would be pulled down equally by gravity. You would not push on the scale and it would not push back against you. Therefore, your weight would read zero.

Because the shuttle and all of the objects in it are falling around the world at the same rate, everything in the shuttle that is not secured floats. If you have long hair, it floats around your face. If you pour a glass of water out, it assumes a large, spherical drop that you can break up into separate, smaller drops (see this page for information on liquid surface tension). Food and candy gently float to your mouth if you push them in that direction. While sitting in your seat, you have no sense that you are seated because your body does not press against the seat. If you are not secured to something, you float. Furthermore, if you cannot reach a wall or hand/foot-hold, you cannot move from your position because you have nothing to push against. For this reason, NASA has placed many restraints, hand-holds and foot-holds throughout the cabin of the shuttle.

"For every action, there is an opposite, but equal reaction."

To move in any direction in microgravity, you must push against something so that it can push against you in the opposite direction. Furthermore, whatever you push on must be either anchored or more massive than you, such as the wall of the shuttle.