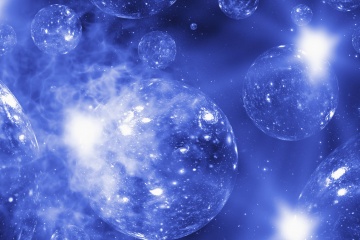 We're talking about multiverses, so you know the drill: Imagine you're you but instead of eating an apple as a snack today, you ate a piece of pizza. Or imagine you're not you because protons don't work the same way where "you" are, and atoms don't form and all the universe is lifeless and weird. Or imagine anything at all, because when we talk about the multiverse, we often find ourselves going over these infinite possibilities for existence. Which is fine and good; the multiverse is about these "alternative" worlds. But it's also a channel of physics that might answer some serious questions, while still prompting some tough criticism from skeptics.

First, let's talk about the multiverse's rise to popularity -- and why it's so very unpopular with some scientists who argue it's more philosophy than science. We'll start with the Standard Model of particle physics, which is basically the accepted model of the fundamental matter and forces that exist in the universe. At this point, we've seen 'em all: the matter particles (including things like electrons and protons), and the four forces that they interact with.

The one discrepancy we had with the Standard Model is that -- while we know that particles have mass -- we couldn't figure out how that mass was gained. When scientists observed the Higgs boson in 2012 during experiments at the Large Hadron Collider, the last piece of the Standard Model puzzle slid into place: the Higgs field, comprising a soup of Higgs bosons, allows particles to gain mass. We all celebrated because science was figured out, and everyone could go home to ponder more important issues, like if Lady Mary could just run Downton Abbey on her own and leave the pesky suitors out of it.

I'm guessing you've already determined that science isn't solved, and vanilla Lotharios are still bombarding Mary every week. Because while the Standard Model works great for what we've observed, it still possesses some huge, gaping holes. And it's how scientists explain those holes that we come upon the idea of the multiverse. So let's examine some of those gaps, to see why a multiverse might start to sound appealing.

There are a few big things the Standard Model doesn't answer. Like how gravity works within the Standard Model, and how the other three fundamental forces might be united into a single one. Another outstanding question is that the universe is largely made up of dark matter and energy; we've never been able to observe what that mysterious "other" matter is. The third is that while we saw the Higgs boson in LHC experiments, we observed it at a mass that made little sense. It should've been extremely large; it was actually quite light [source: Fermilab]. Now you or I -- assuming you're not a world-renowned physicist, and if you are please identify yourself -- are probably thinking, "Too bad. Sounds like the Standard Model isn't so standard, or much of a model. Back to the drawing board to create the Alternative Standard Model that actually explains stuff."

We're in a fascinating time to examine what the lies beyond the Standard Model, thanks to the Large Hadron Collider. The LHC works by smashing protons together at enormous speeds -- nearly the speed of light. (That's why they call them particle accelerators.) When the protons collide, a small-scale Big Bang occurs that reproduces the conditions right after our universe began. We can study the debris that flies from these proton-smashes to see if we can find any particles that might go beyond the Standard Model, giving us a better idea of how to answer the questions the model doesn't.

Remember how we said we should thank the Large Hadron Collider for providing such a fertile time for particle physics? Some scientists are more likely to grumble a "thanks for nothing" to the old LHC. Because beyond the Higgs, it's found nothing. Which is a pretty big deal, because one widely accepted idea to fill in the Standard Model holes was the idea of supersymmetry. In short, supersymmetry said that for every known particle of mass or force, there was a yet-unseen superpartner that was much heavier.

Supersymmetry would present an elegant, natural solution to a whole host of Standard Model questions. It presents a viable candidate for dark matter (in the form of a superpartner), it explains mass discrepancies and it even could unify the three forces at a single high energy [source: Schwartz]. Unfortunately, the LHC hasn't found a single superpartner yet, although we really should be finding some at about the same mass as the Higgs. In fact, we haven't found any evidence for supersymmetry, period.

Essentially, the multiverse concept (and there's more than one) says that this isn't the only universe in the cosmos. While things might work one way in our little corner, that by no means guarantees that there's a constant, natural order that encompasses Physics with a capital P.

These multiverse ideas take on a host of different forms. Perhaps we live in a universe on top of a universe on top of a universe, and so on into infinity. Perhaps we live in a "pocket" universe in an infinite field of universes. Maybe we even live in a universe of universes where any possible outcome of anything can occur, because all probabilities exist in their own universe. In any context, the multiverse includes one crucial point: We're an accident. Our universe hasn't been specially tuned to have the just-right constants that make our existence -- and the existence of everything -- possible. Instead, it's just a statistical probability that in an infinite number of universes, one of them would come out like ours, with particles that can clump to form atoms, molecules, grass, air, stars, Lucky Charms and people.

A lot of physicists find this prospect bleak. Why study the universe if there's nothing to discover? If it's nothing but a statistical coincidence that our world works the way it does, what's so exciting about trying to figure out at what energy the forces unify? It's just a number. But beyond the ho-hum reasons to be wary of the multiverse, some physicists argue that it's downright irresponsible science, since it hasn't been seen and no one can prove it.

Of course, science is often based on big questions that aren't always easily tested; that's completely fair. We can't just come up with ideas based on fact, or else there would never be a spark of creativity to move us beyond what we already know. But scientists do rely on moving toward finding testable hypotheses, or else we're in another realm -- dare I say, universe -- called philosophy.

Which is exactly what some physicists find so upsetting about the multiverse and other seemingly untestable doozies like string theory, with its multiple dimensions we have no hope of seeing. (Or feeling. Or hearing. You get the idea.) If we can't test them, they're nothing but theoretical ideas, relegated to dinner party "what if" discussions.

Of course, a lot of important scientific theories don't appear to be easily testable at the outset. The problem with multiverses is that it requires us to stop looking at the things we can see, and try to explore what we can't see [source: Frank]. Attempting to unlock the mystery of what we can observe, some would argue, is far more important than chasing the hypothetical things we have no hope of discovering.

Author's Note: What is the multiverse?

As you might be able to tell, the concept of the multiverse is wildly polarizing in the physics community. In the sources, you'll see examples from people who both love and loathe it, and I would encourage you to read both sides of the argument.