Will we ever unite quantum mechanics with general relativity? 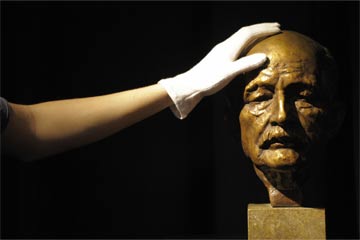 A bust of Max Planck gets a quick dusting. Planck is known as one of the founding fathers of quantum theory.
Michael Gottschalk/AFP/Getty Images

More often than not, the questions that come up during the course of the day are ones we can all answer pretty confidently. Have you eaten lunch? Did you hear Taylor Swift's new song? Is it a confessional about a boy she dated once?

But when we begin to ponder the big questions -- the one we tackle today asks if quantum mechanics and general relativity can ever be reconciled -- our self-assurance plummets. Doesn't quantum mechanics have something to do with planets? Is general relativity the one with energy equaling mass times the velocity of light squared? Wait, was that mass or motion? Or minutes. It's minutes, isn't it?

No fear. Although this question is extremely difficult to answer, the question itself is as simple as deciphering a pop star's lyric. Before we begin solving the unsolvable universe, let's break down the components.

First let's tackle quantum mechanics. And it's a good place to start, because it's the study of something extremely small -- matter and radiation at the atomic and subatomic levels. It was really only when scientists began understanding atoms that regular old physics needed a bit of an amendment. Because as scientists looked at atoms, they didn't behave as the rest of the universe did. For instance, electrons didn't orbit the nucleus like a planet orbiting the sun -- if so, they would've careened into the nucleus [source: Stedl].

It became clear that classical physics didn't cut it on an atomic scale. So quantum mechanics arose out of a necessity to understand how very small phenomena acted differently than the Big Things in science. What we discovered was that something like a photon could act as a particle (which carries mass and energy) and a wave (which carries only energy). This is a big deal -- it could be two things at once. And it means that the smallest parts of the universe fluctuate dramatically, and with no way of knowing the particular location at any time.

So now we understand that quantum mechanics essentially blasted open how we think about the universe (when it comes to the tiniest of scales). Particles can be waves, for instance. Just to add to the fun, the uncertainty principle of quantum mechanics tells us that we can't really tell where a particle is or how fast it's moving at the same time.

Einstein wasn't having it. The idea that we couldn't really tell where a particle was or what is was doing must've been deeply unsettling to a physicist devoted to defining The Way the Universe Worked -- which Einstein did, with the theory of general relativity.

OK, not exactly. It's actually really big things that are making space-time warp. The sun, for instance, is curving space-time toward it. And what would that imply? Ah, that's right: Smaller planets would fall into orbit around it.

Which brings us to gravity. Indeed, general relativity wasn't just Einstein patting Newton on the back and saying, "Yes, sir, gravity's a thing!" Instead, Einstein gave us a reason for gravity -- that the curvature of space-time made gravity exist, and made the universe act the way it did.

So what's the problem? Einstein showed us a mind-blowing way the universe works, and quantum mechanics shows us a fascinating way that particles on an atomic and subatomic level work. Unfortunately, one doesn't explain the other. Which means there must be some larger theory encompassing them ... or not?

Do We Have the World on a String? 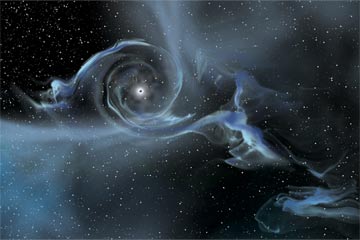 A black hole could be one of the best bets for figuring out how quantum mechanics and relativity relate to each other. Pictured here is a large black hole grabbing gas from a companion star.
Image courtesy NASA E/PO, Sonoma State University, Aurore Simonnet

We can't understand how quantum mechanics and the general theory of relativity could reconcile without first understanding how they -- right now -- do not. Because it turns out that neither one really works if the other is true.

Einstein said that space-time is a smooth constant, and that only big things can warp it. Quantum mechanics said that the smallest parts of the universe are constantly, dramatically fluctuating and changing.

If quantum mechanics is correct and everything is in fuzzy motion constantly, then gravity wouldn't work the way Einstein predicted. Space-time would also have to be constantly at odds with everything around it, and would act accordingly. Moreover, quantum mechanics said that you couldn't -- with any certainty -- declare a set order. Instead, you had to settle for predicting probabilities.

On the other hand, if general relativity is correct, then matter couldn't fluctuate so wildly. You would, at some point, be able to know where all matter is and exactly where it's going. Which, again, is at odds with quantum mechanics.

But rest assured that scientists, physicists and armchair experts alike are all desperately trying to find a way to reconcile the two. One front-runner is string theory, which says instead of a particle acting as a dot, it acts as a string. That means it would be able to wave and move and loop and generally do all sorts of stuff that one point couldn't. It could also transmit gravity on a quantum level, and the spread of the particles on a string would theoretically make a less jumpy, less crazy atmosphere. Which opens the theory, of course, to agreeing with general relativity. But keep in mind that string theory has never been confirmed with any experiment -- and there's much debate if it can be proven at all.

If such a monumental experiment were to occur, it would likely happen at a particle accelerator. That's where we might find superpartners. (No, not Batman and Robin). Superpartners are a part of string theory that says each particle has a supersymmetrical partner particle that's unstable and that spins differently (for example, the electron and the selectron or the graviton and the gravitino). Lucky for us, in 2010 we found evidence of our first Higgs boson when crashing particles together in the Large Hadron Collider, so we might be on our way to experimentally proving string theory.

Spin also might help us experiment with quantum entanglement, where electrons get caught in each other's spin. It's easy to see in small spaces, but scientists are working to send photons into space and back to measure how it works over a large distance -- and curvature -- of space and time.

But we also might look to black holes to suss out a Theory of Everything (a TOE!). In a black hole, you have a really heavy thing (a star, which general relativity applies to) and a really small thing (the teeny tiny speck it's crushed into, which quantum mechanics explains). So if we can determine what happens -- or what changes -- when the big gets small, we just might reconcile quantum mechanics and the general theory of relativity.

Author's Note: Will we ever unite quantum mechanics with general relativity?

Sometimes, I wish an article's headline was just a disclaimer: "Do not be afraid of this subject." It's a shame that these Big Ideas -- Einstein's theories, quantum mechanics -- have the reputation of being beyond the public's understanding. Sure, the math behind it is beyond most of us, but one can grasp the ideas without it. There be no dragons in physics; don't be afraid to suss out what you don't know.

What if You Really Ate 50 Eggs Like in 'Cool Hand Luke'?
10 Famous Paranormal Hoaxes
What If the Amazon Rainforest Is Completely Destroyed?