History of the Metric System in the U.S. 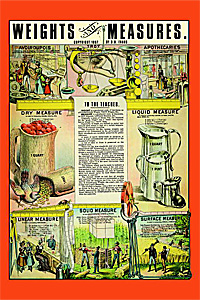 This U.S. poster from 1897 gets the word out about the country's measuring system.
Buyenlarge/Getty Images

As subjects of the British Empire, American colonists inherited and used the British Imperial System, which itself evolved from a tangled mess of medieval weights and measures. Even as France developed and refined the metric system throughout the late 1700s, England and its American colonies pressed forward with an antiquated measurement system.

It's not that American leaders didn't want to control the chaos. In the Constitution of the newly formed United States of America, Article I, Section 8 provided that Congress should have the power "to coin Money ... and fix the Standard of Weights and Measures." The first practical analysis of this provision fell to George Washington's Secretary of State, Thomas Jefferson, in 1790. Jefferson endorsed a decimal system of measurement but, when presented with the basic principles of the decimal-based metric system, felt reluctant to steer his nation in that direction. He feared that the U.S. wouldn't be able to verify the metric unit of length without sending a costly delegation to France.

The evolving political situation didn't help matters. Although France supported the American colonies during the Revolutionary War, it became hostile to the U.S. after Jay's Treaty was ratified in 1795. The French viewed the treaty, which eliminated British control of posts in the Northwest Territories and provided America a limited right to trade in the West Indies, as a blossoming alliance between the U.S. and England. France retaliated by sending privateers to target American merchant ships. By the time John Adams became president in 1797, the hostilities between the U.S. and France had grown quite intense. It's no surprise, then, that in 1798, France snubbed the U.S. when it invited dignitaries from foreign countries to travel to Paris to learn about the metric system.

Even if U.S. representatives had visited Paris in 1798 and been wowed by the metric demonstration, it's unlikely that they would have persuaded American leaders to change the country's system of weights and measures. In 1821, after studying the various units of measurement used by the 22 states, Secretary of State John Quincy Adams determined that the U.S. Customary System was sufficiently uniform and required no changes. In addition, there was concern among American statesmen that the French commitment to the metric system might falter in the aftermath of Napoleon Bonaparte's ill-fated reign during the early 19th century.

Up next: The metric system moves forward.