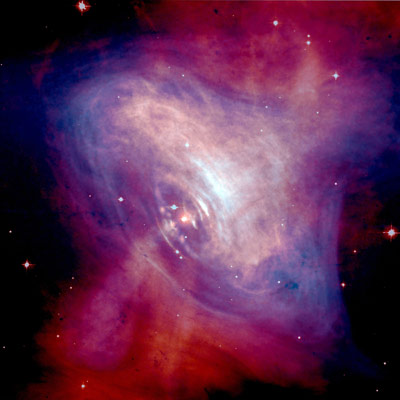 In this composite image of the Crab Nebula, matter and antimatter are propelled nearly to the speed of light by the Crab pulsar. The images came from NASA's Chandra X-ray Observatory and the Hubble Space Telescope.
Photo by NASA/Getty Images

This isn't a trick question. Antimatter is exactly what you might think it is -- the opposite of normal matter, of which the majority of our universe is made. Until just recently, the presence of antimatter in our universe was considered to be only theoretical. In 1928, British physicist Paul A.M. Dirac revised Einstein's famous equation E=mc². Dirac said that Einstein didn't consider that the "m" in the equation -- mass -- could have negative properties as well as positive. Dirac's equation (E = + or - mc2) allowed for the existence of anti-particles in our universe. Scientists have since proven that several anti-particles exist.

These anti-particles are, literally, mirror images of normal matter. Each anti-particle has the same mass as its corresponding particle, but the electrical charges are reversed. Here are some antimatter discoveries of the 20th century:

When antimatter comes into contact with normal matter, these equal but opposite particles collide to produce an explosion emitting pure radiation, which travels out of the point of the explosion at the speed of light. Both particles that created the explosion are completely annihilated, leaving behind other subatomic particles. The explosion that occurs when antimatter and matter interact transfers the entire mass of both objects into energy. Scientists believe that this energy is more powerful than any that can be generated by other propulsion methods.

So, why haven't we built a matter-antimatter reaction engine? The problem with developing antimatter propulsion is that there is a lack of antimatter existing in the universe. If there were equal amounts of matter and antimatter, we would likely see these reactions around us. Since antimatter doesn't exist around us, we don't see the light that would result from it colliding with matter.

It is possible that particles outnumbered anti-particles at the time of the Big Bang. As stated above, the collision of particles and anti-particles destroys both. And because there may have been more particles in the universe to start with, those are all that's left. There may be no naturally-existing anti-particles in our universe today. However, scientists discovered a possible deposit of antimatter near the center of the galaxy in 1977. If that does exist, it would mean that antimatter exists naturally, and the need to make our own antimatter would be eliminated.

For now, we will have to create our own antimatter. Luckily, there is technology available to create antimatter through the use of high-energy particle colliders, also called "atom smashers." Atom smashers, like CERN, are large tunnels lined with powerful supermagnets that circle around to propel atoms at near-light speeds. When an atom is sent through this accelerator, it slams into a target, creating particles. Some of these particles are antiparticles that are separated out by the magnetic field. These high-energy particle accelerators only produce one or two picograms of antiprotons each year. A picogram is a trillionth of a gram. All of the antiprotons produced at CERN in one year would be enough to light a 100-watt electric light bulb for three seconds. It will take tons of antiprotons to travel to interstellar destinations.