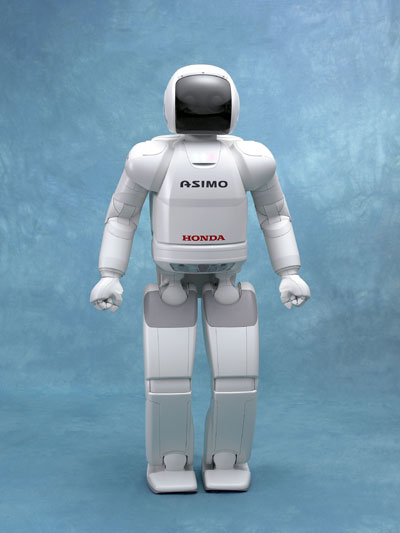 Honda researchers began by studying the legs of insects, mammals, and the motion of a mountain climber with prosthetic legs to better understand the physiology and all of the things that take place when we walk -- particularly in the joints. For example, the fact that we shift our weight using our bodies and especially our arms in order to balance was very important in getting ASIMO's walking mechanism right. The fact that we have toes that help with our balance was also taken into consideration: ASIMO actually has soft projections on its feet that play a similar role to the one our toes play when we walk. This soft material also absorbs impact on the joints, just as our soft tissues do when we walk.

ASIMO has hip, knee, and foot joints. Robots have joints that researchers refer to as "degrees of freedom." A single degree of freedom allows movement either right and left or up and down. ASIMO has 34 degrees of freedom spread over different points of its body in order to allow it to move freely. There are three degrees of freedom in ASIMO's neck, seven on each arm and six on each leg. The number of degrees of freedom necessary for ASIMO's legs was decided by measuring human joint movement while walking on flat ground, climbing stairs and running.

ASIMO also has a speed sensor and a gyroscope sensor mounted on its body. They perform the tasks of:

These sensors work similarly to our inner ears in the way they maintain balance and orientation.

ASIMO also has floor surface sensors in its feet and six ultrasonic sensors in its midsection. These sensors enhance ASIMO's ability to interact with its environment by detecting objects around ASIMO and comparing gathered information with maps of the area stored in ASIMO's memory.

To accomplish the job our muscles and skin do in sensing muscle power, pressure and joint angles, ASIMO has both joint-angle sensors and a six-axis force sensor.

Unless you know a lot about robotics, you may not fully grasp the incredible milestone it is that ASIMO walks as we do. The most significant part of ASIMO's walk is the turning capabilities. Rather than having to stop and shuffle, stop and shuffle, and stop and shuffle into a new direction, ASIMO leans and smoothly turns just like a human. ASIMO can also self-adjust its steps in case it stumbles, is pushed, or otherwise encounters something that alters normal walking.

In order to accomplish this, ASIMO's engineers had to find a way to work with the inertial forces created when walking. For example, the earth's gravity creates a force, as does the speed at which you walk. Those two forces are called the "total inertial force." There is also the force created when your foot connects with the ground, called the "ground reaction force." These forces have to balance out, and posture has to work to make it happen. This is called the "zero moment point" (ZMP).

Although ASIMO isn't quite ready for prime time (there are still improvements that need to be made to allow it to fully function as Honda hopes), Honda has put ASIMO to work as a receptionist in its office in Wako in Saitama prefecture, just north of Tokyo. ASIMO spends its time greeting guests and leading them around the facilities.

To perform these duties, ASIMO has to be specially programmed to know the layout of the buildings and the appropriate way to greet visitors and answer questions.

If the thought of an army of ASIMO robots gives you the heebie jeebies, you can relax. Honda says that ASIMO will never be used in military applications.