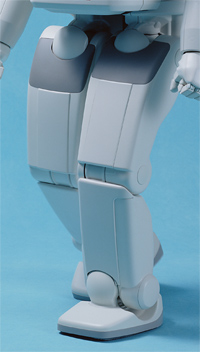 ASIMO can sense falling movements and react to them quickly; but ASIMO's engineers wanted more. They wanted the robot to have a smooth gait as well as do something that other robots can't do -- turn without stopping.

When we walk around corners, we shift our center of gravity into the turn. ASIMO uses a technology called "predictive movement control," also called Honda's Intelligent Real-Time Flexible Walking Technology or I-Walk, to accomplish that same thing. ASIMO predicts how much it should shift its center of gravity to the inside of the turn and how long that shift should be maintained. Because this technology works in real time, ASIMO can do this without stopping between steps, which other robots must do.

Essentially, with every step ASIMO takes, it has to determine its inertia and then predict how its weight needs to be shifted for the next step in order to walk and turn smoothly. It adjusts any of the following factors in order to maintain the right position:

While reproducing a human-like walk is an amazing achievement, ASIMO can now run at speeds up to 3.7 miles per hour (6 kilometers per hour). In order to qualify as a true running robot, ASIMO must have both feet off the ground for an instant in each step. ASIMO manages to be airborne for .08 seconds with each step while running.

Honda engineers encountered an entirely new set of challenges while trying to give ASIMO the ability to run. They gave ASIMO’s torso a degree of freedom to aid in bending and twisting so that the robot could adjust its posture while airborne. Without this ability, ASIMO would lose control while airborne, possibly spinning in the air or tripping when landing.

In order to make turns smoothly while running, the engineers enhanced ASIMO's ability to tilt its center of gravity inside turns to maintain balance and counteract centrifugal force. ASIMO could even anticipate turns and begin to lean into them before starting the turn, much like you would if you were skiing or skating.

In the next section, we’ll look at how ASIMO is able to recognize images and sense its environment.