Soyuz Flight to the ISS 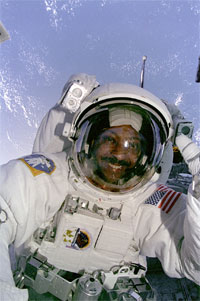 Every trip into space is different, but to get a feel for what it's like to work and live as an astronaut, let's look at a typical mission involving a Soyuz launch to the International Space Station (ISS).

The Soyuz rockets, which have changed very little since their original design four decades ago, launch from Baikonur Cosmodrome in Kazakhstan. The Russians have launched Soyuz rockets more than 1,500 times in the history of their space program, making this model one of the most used and most reliable in the history of space travel.

Engineers move the rocket by rail to the launch site two days before liftoff. There, they erect the rocket. At the launch pad, the craft, roughly 50 meters (164 feet) in length, is secured with three large arms that make sure the rocket is pointed skyward. These arms will fall away as the rocket pushes away from the ground.

Then the launch team performs a rehearsal. This practice run engages all mechanical and electrical systems to ensure that they are operating correctly.

With their long days of training finally complete, the astronauts enter the Soyuz crew capsule 2.5 hours before liftoff. They work in collaboration with ground controllers to prepare the rocket for its final launch sequence.

At this point, the crew tower disconnects from the main rocket body. The second stage of the rocket, however, continues to fire, subjecting those onboard to gravitational forces three times stronger than those on Earth. From a physical standpoint, this part of the journey is by far the most arduous.

Five minutes after launch, the craft is 170 kilometers (106 miles) above Earth. Then, the second stage of the rocket separates, and the third-stage rocket takes over propulsion duties. The ship is moving at more than 13,000 kilometers (8,000 miles) per hour.

Nine minutes following launch, the third stage of the engine stops firing and the orbital module separates from the rocket, at an altitude of nearly 220 kilometers (137 miles). The module's communication antennas and solar arrays unfurl, and the craft begins its approach to the ISS.

The rendezvous and docking procedures are fully automated. In case of emergency, though, the astronauts can interrupt this process and take control. It usually takes about two days from launch for the Soyuz capsule to reach the ISS, but recently Russian engineers have altered launch trajectories so that docking can begin in as little as six hours from launch.