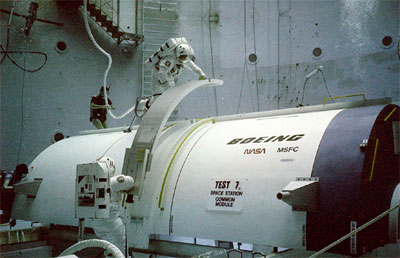 Two astronauts practice in the Neutral Buoyancy Simulator at Marshall Space Center in Huntsville, Ala. Training underwater helps astronauts see what it's like to work in microgravity.
Dennis Keim/NASA

Astronauts have to be prepared both for general space travel and for their specific mission. To get them ready, NASA has a variety of environments for astronaut training.

Some training facilities and simulators include:

At the end of the advanced mission training phase, an astronaut is finally ready to carry out his or her assigned mission.