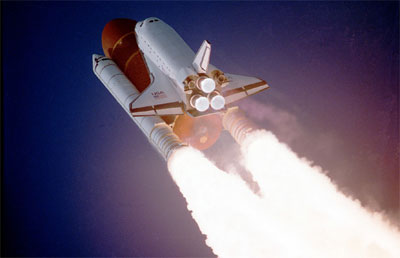 Space Shuttle Atlantis launches on Dec. 2, 1988 on a classified mission for the U.S. Department of Defense.
Image courtesy NASA

Because of zero gravity (or microgravity, to be more precise), working in space is quite different from working on Earth. Astronauts must get used to being weightless, which causes bone and muscle deterioration and requires that all loose items -- including sleeping astronauts -- be tied down. Eating, drinking and using the bathroom are especially challenging activities for astronauts in orbit. Over the years, NASA has designed ingenious solutions that make living in space as comfortable as possible.

While in orbit, astronauts spend most of their time in the relatively safe confines of the craft or space station. Many missions, however, require a spacewalk, perhaps to deploy a satellite or make repairs. During a spacewalk, an astronaut must wear a space suit -- what NASA calls an extravehicular mobility unit (EMU) -- to protect and sustain him or her in the vacuum of outer space. Each EMU has a hard upper torso, a lower torso assembly and legs.

A portable life support system, or PLSS, integrates fully with the suit and is worn like a backpack. The weight of the EMU-PLSS assembly is considerable. The suit itself weighs about 110 pounds (50 kilograms), and the PLSS about 310 pounds (141 kilograms). For this reason, NASA designed EMUs for work in weightless conditions only, where the weight of the suit itself is unimportant. The Apollo suit, by comparison, was much different. Including the life support backpack, the Apollo suit weighed about 180 pounds (82 kilograms).

Most space stations missions last two to three weeks, but longer-duration missions may run as long as half a year. Usually, one astronaut on the Soyuz will trade places with one of the astronauts on the space station at the end of the mission. Then it's back to Earth.

While the mission described above makes space flight seem routine, every trip into space is a razor's-edge walk between success and disaster. One of the earliest mishaps occurred in the Soviet Union in 1960. In what is now known as the Nedelin catastrophe, an R-16 rocket exploded during launch, killing 126 Soviet space and missile personnel.

The U.S. has not been immune to such tragedies. In 1967, while conducting a routine test of Apollo 1's Command and Service Module, astronauts Ed White, Gus Grissom and Roger Chafee died when a fire broke out in the cockpit. And two space shuttle tragedies have claimed the lives of 14 astronauts: the Challenger disaster in 1986 and the Columbia disaster in 2003. Christa McAuliffe, the first teacher in space, died in the Challenger explosion.