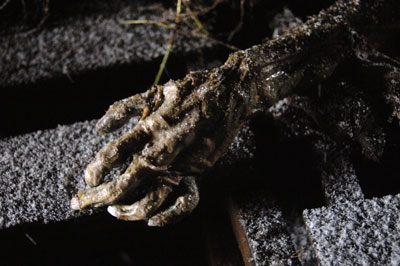 In order to understand how body farms work, it helps to know some basics about human death and decay. Though it sounds pretty macabre, it's perfectly normal for your body to go through some radical changes when you die.

To begin with, when your heart stops beating, your body's cells and tissues stop receiving oxygen. Brain cells are the first to die -- usually within three to seven minutes [source: Macnair]. (Bone and skin cells, though, will survive for several days.) Blood begins draining from the capillaries, pooling in lower-lying portions of the body, creating a pale appearance in some places and a darker appearance in others.

About three hours after death, rigor mortis -- a stiffening of muscles -- sets in. Around 12 hours after death, the body will feel cool, and within 24 hours (depending on body fat and external temperatures), it will lose all internal heat in a process called algor mortis. The muscle tissue begins to lose its stiffness after about 36 hours, and within about 72 hours of dying, the body's rigor mortis will subside.

As the cells die, bacteria within the body begin breaking them down. Enzymes in the pancreas cause the organ to digest itself. The body soon takes on a gruesome appearance and smell. Decomposing tissue emits a green substance, as well as gasses such as methane and hydrogen sulfide. The lungs expel fluid through the mouth and nose.

Insects and animals certainly take notice of all this. A human body provides sustenance and a great place for insects to lay eggs. A fly trying to find its way in this crazy, mixed-up world can eat well on a corpse, and then lay up to 300 eggs upon it that will hatch within a day.

Maggots -- the larvae that emerge from these eggs -- are extremely efficient and thorough flesh-eaters. Starting on the outside of the body where they hatched, maggots use mouth hooks to scoop up the fluids oozing out of the corpse. Within a day's time, the maggots will have entered the second stage of their larval lives, as well as burrowing into the corpse.

Moving around as a social mass, maggots feed on decaying flesh and spread enzymes that help turn the body into delectable goo. The breathing mechanism of a maggot is located on the opposite end of its mouth, enabling it to simultaneously eat and breathe without interruption around the clock. While a first-stage larva is about 2 millimeters long, by the time it exits the third stage and leaves the body as a prepupa, it may be as large as 20 millimeters -- 10 times its initial length. Maggots can consume up to 60 percent of a human body in under seven days [source: Australian Museum].

The environment in which a dead body is placed also affects its rate of decay. For instance, bodies in water decompose twice as fast as those left unburied on land. Decomposition is slowest underground -- especially in clay or other solid substances that prevent air from reaching the body since most bacteria require oxygen to survive.

Now that we know more about human decay, we'll look at a group of people whose workplace smacks strongly of it: forensic anthropologists.

Do Nails and Hair Keep Growing After Death?

It once was commonly believed that nails and hair continued to grow on a dead body. To the casual observer, it would seem true. However, this visual effect is caused by shrinkage of the skin, scalp and cuticles.