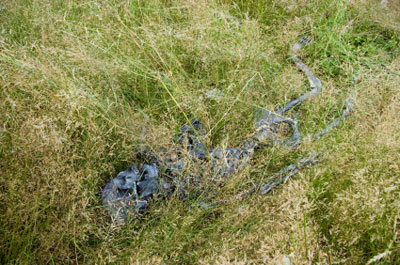 At body farms, corpses are assigned to particular spots and left to decompose. Forensic anthropology students study how environment affects the corpses and their rate of decomposition.
©iStockphoto/ranplett

The first body farm (officially known as the University of Tennessee Forensic Anthropology Facility) was opened by Dr. William Bass in 1971. Bass recognized the need for research into human decomposition after police repeatedly asked for his help analyzing bodies in criminal cases. What started as a small area with one body has developed into a 3-acre complex that contains remains of around 40 individuals at any one time. The facility became famous (and gained its moniker) after it inspired Patricia Cornwell's 1995 novel, "The Body Farm."

Where do these bodies come from? When Dr. Bass first started the body farm, he used unclaimed bodies from medical examiners' offices. Later, people started donating their bodies to the facility to help with forensic studies.

There's no common set of standards or guidelines that body farms adhere to, other than safety, security and privacy. Even the dimensions of the facilities vary. Western Carolina University's body farm is about 59-feet (18 m) squared and is built to hold about six to 10 bodies at a time, while the body farm at the University of Tennessee holds around 40 bodies and covers nearly 3 acres. And even body farms are bigger in Texas: The facility at University of Texas-San Marcos covers about 5 acres.

Each facility also has a different focus. The Tennessee body farm pursues a broad range of study into decomposition under all conditions -- buried, unburied, underwater and even in the trunks of cars. The body farm at Western Carolina places emphasis on decomposition in the mountainous region of the Carolinas. Texas' body farm also provides region-specific data. Forensic anthropologists from states like New Mexico are waiting on data from Texas so they can comprehensively study decomposition in desert climates.

Generally, when a facility accepts a body, it's placed in a refrigerator (not unlike one found in a morgue). The body is then assigned an identifying number and placed in a specific location on the grounds of the body farm. The location of each body is carefully mapped. Students learn how to maintain the chain of evidence when working with the bodies. In a criminal case, it's imperative that anyone coming into contact with human remains logs that he or she handled it. This way, no legal questions can be raised about the integrity of the evidence or possible gaps in its custody.

The bodies are allowed to decompose for various amounts of time. Then students practice locating, collecting and removing the remains from the area. The remains are taken to a laboratory and further analyzed. When analysis is finished, the skeleton may be returned to the family of the deceased for burial, if requested. Otherwise, it will likely remain in the department's collection of skeletons. U of T-Knoxville boasts a collection of skeletal remains from more than 700 people.

Body farms may or may not cover the bodies with wire cages. Doing so prevents coyotes in Texas from making off with body parts, but security fencing at the much smaller Western Carolina facility is sufficient.

What are students learning on the body farm? And how is their research helping in real criminal investigations? Find out next.

In 2006, there were more corpses and skeletons on the U of T-Knoxville campus (around 900 in the osteopathological collection, 700 between two skeletal collections and 40 more on the body farm itself) than there were Asian students currently enrolled (673 total undergraduate and graduate) [source: Nair].