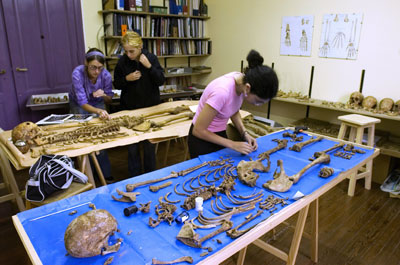 In the last section, we learned about the basic setup and operation of a body farm. Now let's look at what scientists learn at these facilities.

Body farms allow scientists to study the natural decay of the human body as well as how a decomposing body affects the world around it. For instance, entire insect populations will rise or fall based on the presence of a corpse. A decaying body will even affect surrounding vegetation, killing off some flora with digestive enzymes.

Forensic anthropologists can determine an individual's age, sex, race and body type by looking at the corpse's bones. There's normally not enough difference between genders in the skeletal remains of preadolescent children to identify the sex of the child. The easiest way to detect the gender of an adult skeleton is to simply look at the size of the bones -- males' bones are normally larger, as are the areas where muscle connections are made. There are many differences in the pelvic bone, the most obvious of which is the size of the pelvic inlet (the space inside the pelvic bone). The inlet is larger in women to aid in the birthing process.

The skull also offers clues to facilitate sex determination. Males tend to have backward-slanting foreheads while females' are rounder. Females' chins often come to a point, and male chins are generally more squared off.

Not every bone helps establish an age or range of ages for a set of remains. Forensic anthropologists look for certain things in a very young child -- such as whether or not teeth have come in -- that obviously won't help in analyzing older specimens. Conversely, when they're identifying older bodies, other observations can be made. Ribs can be a helpful determining factor of age. As we get older, the ends of our ribs become more ragged and less flat where they meet the cartilage that connects to the sternum. Therefore, the more ragged the ribs, the older the body. Regardless of what forensic anthropologists examine, there's no way to determine the precise age of an individual, only a general approximation.

When determining the race of a deceased individual, forensic anthropologists seek to place the body in one of three broad groups: African, Asian or European.

This isn't an easy task. Most differences are found in the skull. The distance between eyes or the shape of the teeth help determine ethnicity, as well as more specific genetic background, such as commonalities found in people from certain parts of Asia that other Asians do not share. There are actually more differences within each racial group than there are between each group [source: Ubelaker].

Once age, sex and ethnicity have been determined, this data --combined with bone measurements -- can be used to determine an individual's approximate predeath height and weight.

Though they provide a wealth of useful information, body farms do cause some raised eyebrows, as we'll discuss in the next section.

Does Your Body Weigh Less After You Die?

In 1907, Dr. Duncan MacDougall proposed the idea that the human body loses weight at the moment of death. Today's scientists are skeptical of MacDougall's methodology, and some recent studies with sheep have shown that a body may actually gain as much as a pound momentarily after death. This temporary weight gain has also been measured in humans during meditation and dream states [source: Hollander].