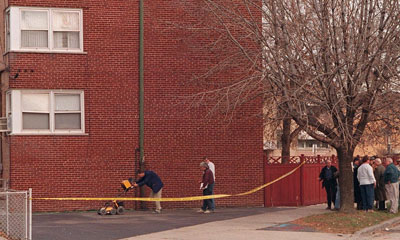 The FBI has long shown a keen interest in using the applications of anthropology to solve crimes. The agency began utilizing the anthropological laboratories -- and experts -- of the Smithsonian Institute in 1936, and continues to do so. The body farm at University of Tennessee-Knoxville arranges reproductions of crime scenes and likely criminal scenarios using bodies designated for FBI training and research. FBI teams will periodically perform excavations at the body farm to sharpen their corpse-collecting and bone-identifying skills in the field. The FBI has also raised the possibility of testing radar at the facility that would enable it to find bodies buried under concrete.

Skills learned at body farms can help across the globe. When mass graves are found in places like Kosovo, Iraq or Rwanda, examiners can determine the corpses' race and time of death, which helps identify the regime responsible for their death. It can also be determined if the victims were shot, beaten or killed with a blow to the head.

Serial killer John Wayne Gacy killed 33 young men, 29 of whom were buried right below his own house. When investigators discovered these corpses, many of which had been stacked on top of one another, they relied on forensic anthropologists to help them begin the identification process for the badly decomposed bodies. By establishing height and weight and profiling their bones, authorities were able to begin matching this data against information provided by families or from unsolved missing-persons cases.

For years, there were rumors about the death of the Big Bopper (musician J.P. Richardson), who died in a plane crash with Ritchie Valens and Buddy Holly. The distance of Richardson's body from the plane -- 40 feet (12 m) -- raised questions about whether or not he had survived the plane crash but died walking away in search of help. Richardson's son contacted Dr. Bass to put the mystery to rest. Bass agreed to examine the body, which was being exhumed for other purposes.

After examining the body (which was, 48 years later, reportedly still recognizable as the Big Bopper), Bass determined that there was absolutely no way Richardson could have survived the crash. Nearly every bone in his body was broken, meaning he must have been thrown -- and did not walk -- away from the plane.

Forensic anthropology can also help close cold cases. In 1933, the body of 7-year-old Dalbert Aposhian was found floating in San Diego Bay. After examining the body, an autopsy surgeon declared it had been sodomized and mutilated. No one was ever arrested for the crime. In September of 2005, the San Diego County crime lab received funds to reopen cold cases. After re-examining reports and pictures taken during the initial investigation, the medical examiner's office determined that the young man simply drowned. The original report that said he was sexually assaulted and mutilated was actually a misunderstanding of how a body reacts to water [source: Shearer].

For more information on body farms and other related topics, follow the links below.