History of the Bradley Fighting Vehicle 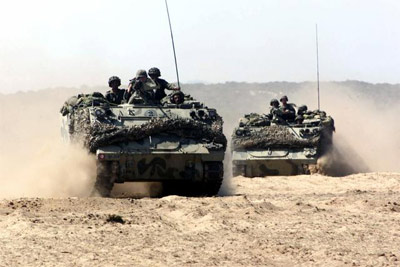 The development of the Bradley dates back to the pre-Vietnam era. The early plans of an advanced armor personnel vehicle were being discussed in the early 1960s, even as the M113 Armored Personnel Carrier was just entering service. The U.S. military recognized the need to address the needs of battlefield transport as far into the future as the 1980s and beyond. The search for a Mechanized Infantry Combat Vehicle (MICV) began in 1963.

The search for an MICV was long. The Army tested and rejected the MICV-65 created by Pacific Car & Foundry in 1965. It was not until 1972 that the Army signed a contract with FMC Corporation for its XM723 MICV design. Four years later, the Army merged the MICV program with the Armored Reconnaissance Scout Vehicle program, noting similarities in requirements. The resulting vehicles were the XM2 Infantry Fighting Vehicle and XM3 Cavalry Fighting Vehicle, each of which incorporated the 25mm M242 Bushmaster, which was also under development at the time.

The Bradley Fighting Vehicle entered production in 1981 and became a replacement for the M113. The Bradley is considered to be a more powerful and faster vehicle than the M113, and its better suspension increases speed on off-road terrain.

Within just a few years after the Bradley rolled into service, its survivability and combat effectiveness became targets of concern. In 1985, it underwent a series of tests as part of the Joint Live Fire Test Program, during which several U.S. and Russian munitions were used to fire on a fully loaded Bradley. In 1988, modifications were incorporated in the M2A2/M3A2 model, including:

These and subsequent enhancements have made the Bradley a highly survivable combat vehicle. In Operation Desert Storm, 2,200 Bradley vehicles were deployed for battle, and only three were lost to enemy fire.

The M2A3 and M3A3 Bradley models were also a result of upgrades made after Desert Storm. The M2A3/M3A3 package is the most technically advanced of the Bradley models, and was approved for production in 1994. This package includes:

With continued modification, the Army has reported that the Bradley will continue to be a key armored vehicle for the U.S. military through the first quarter of the 21st century.

For more information on the Bradley Fighting Vehicle and other war technology, check out the links below.