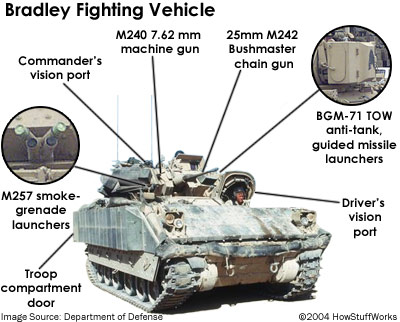 Close-up view of the 25mm chain gun mounted on the top of a U.S. Army M3 Bradley
Photo courtesy Department of Defense - Defense Visual Information Center
Here you can see the side of the box that holds the missile launchers (center) and the four smoke-grenade launchers (lower left). A soldier provides security from the turret as his fellow soldiers uncover a weapons cache in Ramadi, Iraq.
Photo courtesy U.S. Army

The Bradley is a formidable vehicle: It has teeth in the form of high-powered machine guns and anti-tank missiles. These armaments are used to provide protective fire for the troops it transports, as well as to suppress and destroy enemy tanks. Combined with its speed and agility, the Bradley is well equipped to combat enemy vehicles.

The primary weapon of both the M2 and M3 is a 25mm M242 Bushmaster chain gun, which features a single barrel with an integrated dual feed mechanism and remote feed selection. The M242 is mounted on the turret, which is the rotating component that sits on top of the Bradley's main chassis. The gun has a maximum fire rate of 200 rounds per minute. The M2 carries 900 rounds of 25mm ammunition (300 ready-to-fire, 600 in reserve), and the M3 carries 1,500 rounds.

Both Bradley models also have twin BGM-71 TOW anti-tank guided missile launchers mounted on the left side of the turret. TOW is an acronym that stands for Target-sensitive, Optically tracked, Wire-guided missile. An optical sight is used to track each target. After firing the missile, the launch transmits flight data to the missile's guidance system. The missile can reach any target within a 2.33-mile (3.75-km) range. The M2 carries seven BGM-71 TOW anti-tank guided missiles, and the M3 carries 12.

The Bradley is equipped with two M257 smoke grenade launchers, each loaded with four smoke grenades. These grenades are deployed during battle and release smoke to conceal the Bradley from visual observation.