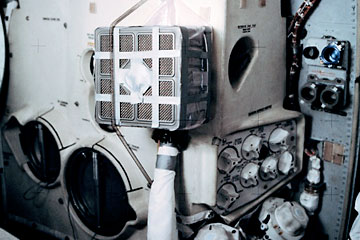 Interior view of the Apollo 13 Lunar Module during the trouble-plagued journey back to Earth -- the "mail box" pictured here was used for purging carbon dioxide. See more space exploration pictures.
Image courtesy of ]

Lithium hydroxide canisters aren't the only solution -- keep reading to find out how SCUBA equipment works in space.

The reaction makes heat. So, you can tell when it's done because it stops heating up. This system has the added advantage of supplying oxygen as well as removing carbon dioxide.

The U.S. Destiny lab portion and Node 3 portion of the ISS contain a carbon dioxide removal assembly (CDRA). The CDRA uses molecular sieve technology to remove carbon dioxide. The molecular sieves are zeolites, crystals of silicon dioxide and aluminum dioxide. The crystals arrange themselves to form tiny screens. The openings of the screens or pores are consistent sizes that allow some molecules to enter and get trapped in the sieves. In the CDRA, there are four beds of two different zeolites. Zeolite 13x absorbs water, while zeolite 5A absorbs carbon dioxide. Each side of the CDRA contains a zeolite 13X connected to a zeolite 5A bed. As the air passes through the zeolite 13X bed, water gets trapped and removed from the air. The dried air goes into the zeolite 5A bed where carbon dioxide gets trapped and removed. The outgoing air is then dry and free from carbon dioxide.

Unlike lithium hydroxide canisters, which get used up and discarded, the zeolites in the CDRA can be regenerated. Electrical heating elements within the beds heat up the zeolites and free the trapped water vapor and carbon dioxide. The carbon dioxide gets vented into outer space, while the water vapor gets condensed and recycled. The CDRA is designed with independent controls so that one half is actively removing carbon dioxide and water from the air, while the other half is regenerating. The two halves alternate. The CDRA is the primary method by which carbon dioxide gets removed from the ISS cabin air, while lithium hydroxide canisters are used as backups.

In October of 2010, a new system, called the Sabatier, was installed on the ISS. It takes carbon dioxide (CO2) that is removed by the CDRA, combines it with the hydrogen gas (H2) generated by the Russian Elektron and U.S. Environmental Control and Life Support System (ECLSS) water electrolysis systems, and forms liquid water (H2O) and methane gas (CH4). The methane gets vented into outer space.

In the future, NASA scientists hope to create oxygen and eliminate carbon dioxide aboard spacecraft and space colonies naturally by growing plants. The plants would not only supply breathable air, but also food for the astronauts. For more space-related info, see the links on the following page. 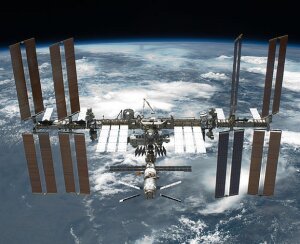