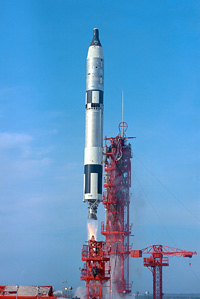 Between NASA's Project Mercury, which launched the first American astronauts into space, and Project Apollo, which landed men on the moon, there was Project Gemini. On May 5, 1961, Alan B. Shepard Jr. became the first American in space. Twenty days later, President John F. Kennedy addressed Congress and announced the goal of landing a man on the moon before the end of the decade.

NASA had a long way to go from Project Mercury. The Mercury spacecraft could hold only one astronaut and had limited capabilities. NASA designed the craft for suborbital and orbital flights. The longest Mercury mission lasted less than a day and a half. In order to make a trip to the moon, NASA would have to create a spacecraft that could stay in space for more than a week.

On top of that, the complex trip to the moon and back would require more than one pilot. The Apollo spacecraft would need to be much larger than the Mercury vehicle. After performing some calculations, NASA engineers determined that it made more sense to find a way to enable the craft to dock with other structures in space. That way, part of the craft could detach from the rest, land on the moon, launch from the moon into a lunar orbit, and rendezvous and dock with the rest of the spacecraft.

NASA scientists decided they needed to create a project to span between Mercury and Apollo. They had to test how humans handle prolonged space travel. The spacecraft would have to be able to dock with another object in space. The new capsule also needed to have more maneuverability than the Mercury spacecraft. Engineers based their design on the Mercury capsule, but made it larger so that two astronauts could travel together. A NASA employee came up with the name Gemini, named after the twin constellation.

What happened in the Gemini project, and why were docking maneuvers so important? Keep reading to find out. ­­