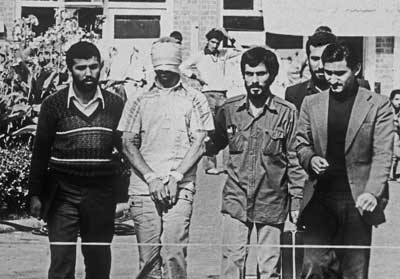 An American hostage is shown at the United States embassy in Tehran.
Photo MPI/Getty Images

The group's first assignment came shortly after its formation, guarding the Pan-American Games in Puerto Rico in 1979 [source: SOC]. While that detail reportedly went smoothly, its next operation -- Eagle Claw -- failed. The objective of the operation, to rescue 66 American hostages at the embassy in Tehran, Iran, wasn't completed. A helicopter carrying Delta Force and other special operations team members crashed, killing eight and ending the operation. Following that, control of Delta Force was taken out of the hands of traditional special operations command [source: VFW Magazine]. Exactly where it was placed, however, remains a mystery.

Delta Force carried out at least one notable textbook operation, based on exactly what the group was formed to do -- rescue hostages in tight spaces. The force boarded a hijacked Indonesian passenger plane in 1980, rescuing the hostages and killing all four hijackers. This wasn't the last time they were called out to handle a hostage situation on an airliner. In other similar scenarios, including hijacked airliners in Algiers, Kuwait, and Cyprus, the Delta Force found themselves blocked from carrying out operations by local authorities [source: SOC].

Being activated -- only to find upon arrival that it wasn't needed or wanted -- would prove to be a pattern for Delta Force. In the early 1980s, for example, Delta Force was tapped to carry out operations to rescue American POWs in Vietnam. Each mission was scrapped, however, after a private American citizen staged his own publicized missions [source: SOC].

While its primary role is to carry out counterterrorist operations, Delta Force also serves other functions -- essentially any type of mission that requires quick and deadly skill from a small group. The group is reported to carry out operations on behalf of other branches of the military and agencies, like the CIA's shadowy Special Activities Staff [source: SpecWarNet].

Delta Force has participated overtly alongside the military in major invasions carried out by the United States. In Grenada, during Operation Urgent Fury, it stormed a prison to release hostages [source: Military.com]. And in Panama, as part of Operation Just Cause, the group rescued an American CIA operative and helped capture president Manuel Noriega [source: Army.com].

Delta Force operators have been involved in missions that required other skill sets. Members of the group infiltrated Libya in 1984, installing surveillance equipment that allowed the United States to keep tabs on militant training camps. From Libya, Delta is said to have made its way to Chad, an African nation friendly to the United States. There, operators trained the Chad military in the use of Stinger missiles and other high-tech weapons supplied by the United States, which was used by Chad to fire on Libyan planes [source: SOC]. A decade later, Delta Force took part in the extensive hunts for Serbian war criminals [source: U.S. News and World Report].