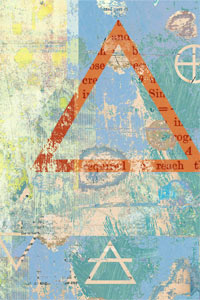 ­Newton wasn't always good at accepting criticism, and intense clashes with the British physicist Robert Hooke and others spurred him to retreat from the scientific community for much of the 1670s. These traumas, combined with the death of his mother, caused Newton to isolate himself during this period. He published little and devoted himself to religious and alchemical studies.

Alchemy was a popular subject back then. In some ways, it can be considered an early form of chemistry. While today there is much stigma against alchemy, many of Newton's contemporaries were involved in it. Practitioners of alchemy, Newton included, thought that common metals could be turned into gold. Other alchemists held similar mystical ideas, such as believing that immortality-granting elixirs could be created. But alchemy was a wide-ranging discipline, encompassing more legitimate practices, like creating paints.

To Newton, alchemy represented a riddle, steeped in ancient Greek myths and the work of past alchemists, whom he studied closely. Deciphering this riddle could allow him to control nature. He even believed that he was potentially part of a line of great men chosen to receive hidden, ancient wisdom [source: NOVA]. Newton so devoted himself to alchemy and its mystical practices that he created a special name for himself: Jehovah Sanctus Unus. It translates, from the Latin, to Jehovah, the Holy One [source: NOVA].

Like many others before him, Newton attempted to produce the mythical philosophers' stone [source: NOVA]. The stone was thought to be a substance that could turn metal into gold, cure diseases and perform other powerful effects.

Newton didn't publish his work on alchemy, in part because he was rather secretive about it. He thought that he made progress on some of alchemy's great challenges, like the philosophers' stone, so he wanted to keep his work to himself. Alchemy was also illegal until just before Newton's lifetime, and by the end of his life, with his reputation well-established and the Enlightenment in full swing, there was great stigma against the practice, particularly for someone as celebrated as Newton.

Some of Newton's texts on alchemy may have been destroyed.­ Others are so full of riddles, code names and vague details as to be difficult to decipher. But many of his texts are available for study and provide an interesting perspective of a complicated, mystically inclined, highly ambitious genius, who wanted to understand the universe in any way he could.