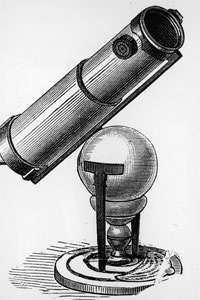 The reflecting telescope invented by Sir Isaac Newton in 1671. By using a curved mirror to reflect and focus the light, the length of the telescope was dramatically reduced.
Hulton Archive/­Getty Images

Newton didn't attempt to publish some of his early discoveries, such as his work on the shape of orbits. Modesty and controversy made him hesitant to share his theories. His claim that all of natural philosophy -- the forebear to the natural sciences -- could be explained through mathematics was both groundbreaking and highly controversial when introduced in 1670 [source: The Newton Project]. That same idea formed the basis of his first masterwork, the Principia.

­Eventually Newton's genius came to be widely known. His three laws of motion -- inertia, acceleration, and action and reaction -- remain a cornerstone of modern physics. His law of universal gravitation laid forth the theory that all particles in the universe exerted some gravitational force. In Newton's view, gravitational force was everywhere, from an apple falling from a tree to the moon being kept in orbit by its mutual attraction with Earth. While imperfect -- his law was later altered significantly by Einstein's theory of relativity -- Newton's conception of universal gravitation dominated physics for more than two centuries.

In his student years, Newton performed experiments in optics examining the nature of light. He found that normal, or "white," light is actually made up of a spectrum of colors. He used prisms to break apart white light into a rainbow of colors and recombine the disparate colors into white light. Despite his breakthroughs in optics, Newton didn't publish his conclusions until 1704, in "Opticks," which was considered his second great scientific treatise [source: The Newton Project].

­Newton also created calculus as a response to the insufficiencies in mathematics of the time. Originally called the fluxions or the "method of series and fluxions," calculus provided methods for solving complex problems about orbits, curves and other issues that classical geometry couldn't solve [source: The Newton Project]. Calculus is particularly suited to these challenges because it produces information about things that are continually changing -- like the speed of a falling object. In calculus, Newton laid the basic framework for understanding these problems and for making the calculations described by his laws of motion and gravitation.