The Genius in Private: Newton and Arianism 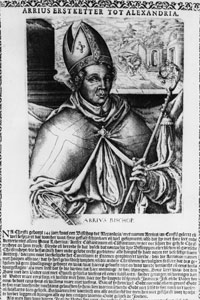 Circa 320 A.D., Lybian theologian Arius, the founder of Arianism, the theological idea that says that Jesus Christ isn't co-equal or co-eternal with God.
Hulton Archive/­Getty Images

­While studying in university, Newton found himself drawn to religion and began a lifelong study of religious history and theology. At that time, he wrote a list of all the sins he had committed, which seemed minor by most standards (such as breaking the Sabbath by baking pies). As a scientist, his religiosity informed his research and motivated his belief that rational forces dominated the world. Newton thought that the universe must abide by calculable rules and laws because a rational, logical force -- God -- had created them.

Newton also had some eccentric theological opinions that came to be shared by the devoted following that developed around him after the publication of the Principia. He thought, for example, that his scientific discoveries were actually recovered "ancient wisdom" from pre-Christian civilizations. In his view, these pre-Christian civilizations understood the laws of the universe, but they encoded these ideas in myths, monuments and religious sites.

Newton also believed that mainstream Roman Catholicism, Anglicanism and Calvinism were heretical and corrupt. He thought that the Holy Trinity, one of the main doctrines of orthodox Christianity, wasn't in line with the beginnings of early Christianity. He was influenced in this regard by an obscure theological notion called Arianism.

Arianism states that Jesus, while created by God, was not divine. Believers in Arianism, Newton included, feel that the Holy Trinity actually represents a heresy that the Council of Nicaea, in the 4th century, mistakenly made part of Christian dogma. Critics of Arianism have said that it encourages polytheism, since it casts Jesus as less than divine but still deserving of worship [source: Britannica].

The Council of Nicaea attempted to do away with Arianism by proclaiming Jesus' divinity and the sanctity of the Holy Trinity. It didn't survive much beyond the 7th century, except in altered form and in the occasional adherent, such as Newton.

Despite his thorough research into theological matters, Newton did not publicize much of his religious inquiries. For him, it was largely a personal effort to get back to the true foundations of his religion [source: Snobelen]. His beliefs were also highly controversial at the time, only a few decades after heretics in England were burned at the stake. So Newton mostly kept his beliefs to himself, for fear of becoming an outcast or losing his university position.

­After he died, Newton's relatives concealed most of his writings on religion and alchemy because they could have severely damaged his reputation. Most of these papers only became available to scholars when they were released on microfilm in 1991.