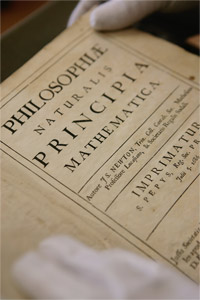 A very excited librarian holds a copy of one of the most important scientific works ever written, the Principia.
Daniel Berehulak/­Getty Images

­Early in his career, Newton was often reluctant to publish his work, despite encouragement from some of the preeminent minds of his day. His own modesty (which didn't last f­orever), combined with some of the criticism he received about his early discoveries, caused him to keep some ideas to himself. But eventually, with the support of Barrow and others, Newton began to write and publish widely.

No publication of Newton's is more important than "Principia Mathematica." In this document, the full name of which is "Philosophiae Naturalis Principia Mathematica," Newton defined his three laws of motion. He described how elliptical orbits work and how bodies in motion exert force upon on another. The work also contained his findings about fluids and mechanics.

Begun during his intensely productive years at Cambridge in the mid-1660s, the Principia, as it's often called, was published in 1687. It represents a transformational work, one of the world's most important scientific treatises. It quickly vaulted him to the elite ranks of scientific theorists.

The Principia provided a physical and mathematical basis for how basic elements of the universe work and how celestial bodies move and interact with each other. No longer were vague stories or conjectures enough to explain the world. From then on, a scientist could not say that the sun revolved around the Earth or make some other declaration without using the mathematical processes (namely, calculus) and rigorous scientific method laid out by Newton.

The work did involve some contributions from Newton's contemporaries and forebears. For example, German scientist Johannes Kepler found that planets had elliptical orbits. He also made other observations about the radii of orbits and how long revolutions took. But he couldn't come up with a mathematical justification of why and how, which is what Newton accomplished, conceiving a universal theory of gravitation that could apply to all celestial bodies, from the smallest moon to the largest star.

­Despite its revolutionary content, scientists found the Principia very difficult to understand. Many of the era's scholars couldn't decipher it, including, for a time, Leibniz and Huygens­, two of Newton's great contemporaries. This gap in understanding existed in part because there were few people in the world studying mathematics at such a high level. And the work seemed very theoretical, difficult to apply in the real world.