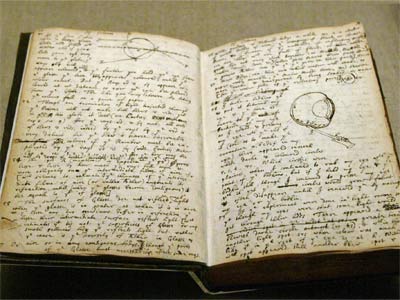 A notebook belonging to Isaac Newton describes an experiment he conducted on himself that involved placing a sharp instrument between his eye and the bone in order to induce the sensation of color.
­AP Photo/Mary Altaffer

­Although he was one of history's great geniuses, Newton certainly capitalized on the work of his predecessors. For example, Galileo had already figured out aspects of two of the basic laws of motion [source: Einstein]. He knew that an object would continue moving unless some outside force acted upon it. He also discovered that a free-falling object's velocity increases over time. But Newton added to these ideas by figuring out that the key to all of these phenomena is mass. Each mass, he determined, influences each other, based on the theory of universal gravitation. Consequently, even the smallest atoms exert gravitational force on one another.

Newton, however, may have wanted his contemporaries to believe that his genius was his alone. Take the well-known apple story. This popular tale finds Newton lying in a garden, considering how the moon orbits the Earth. Suddenly, he sees an apple fall to the ground and has an epiphany -- the same force that caused the apple to fall also kept the moon in orbit around the Earth. But many think that the story is a bit too convenient [source: NOVA]. After all, Newton didn't complete his theory of universal gravitation until 1686. Yet, he later helped to propagate the story as true [source: The Newton Project].

Other stories have been inflated by historians or rumors. Much has been made of Newton predicting the second coming of Jesus in the year 2060, but the date was only Newton's idle speculation [source: Snobelen].

Similarly, it's often said that Newton was born the same year Galileo died, somehow implying a cosmic connection between the two. This claim is based on a mistake produced by using the old Julian calendar for Galileo's death and the modern Gregorian calendar for Newton's birth. In fact, when using the same calendar, Newton's birth and Galileo's death fall almost a year apart.

Newton's deliberate striving toward greatness took its toll on him. Newton once stared at the sun with one eye until he could hardly see anything besides reds and blues. His eyes later recovered.

­It wasn't just his eyes that were sensitive. Newton suffered two nervous breakdowns, and he subsequently gave up scientific research after the second one in 1693. Three years later, he accepted a position with the Mint. Most officers of the Mint had traditionally done little, instead enjoying the title and income that come with such positions, but Newton threw himself into the role and went after counterfeiters.