Putting the “Electro” in “Electromagnet” 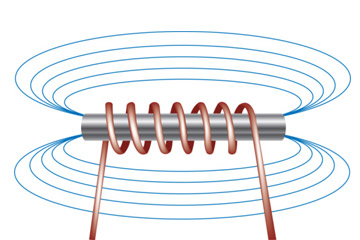 Here's what the magnetic fields look like in a basic electromagnet.
Hemera/Thinkstock

Let’s start with a look at how household batteries function. Most batteries have two easily identifiable poles, a positive and a negative. When the battery isn't in use, electrons collect at the negative pole. When the batteries are inserted into a device, the two poles come into contact with the sensors in the device, closing the circuit and allowing electrons to flow freely between the poles. In the case of your remote, the device is designed with a load, or exit point, for the energy stored in the battery [source: Grossman]. The load puts the energy to use operating the remote control. If you were to simply connect a wire directly to each end of a battery with no load, the energy would quickly drain from the battery.

While this is happening, the moving electrons also create a magnetic field. If you take the batteries out of your remote, it will likely retain a small magnetic charge. You couldn’t pick up a car with your remote, but maybe some small iron filings or even a paper clip.

On the other end of the spectrum is the Earth itself. By the definition we discussed earlier, an electromagnet is created when electrical currents flow around some ferromagnetic core. The Earth’s core is iron, and we know it has a North Pole and a South Pole. These aren't just geographical designations but actual opposing magnetic poles. The dynamo effect, a phenomenon that creates massive electrical currents in the iron thanks to the movement of liquid iron across the outer core, creates an electrical current. This current generates a magnetic charge, and this natural magnetism of the Earth is what makes a compass work. A compass always points north because the metal needle is attracted to the pull of the North Pole.

Clearly, there's a wide range of electromagnet applications between small, homemade science experiments and the Earth itself. So, where do these devices pop up in the real world? In the next section, we’ll take a look at how our everyday lives are affected by electromagnetism.