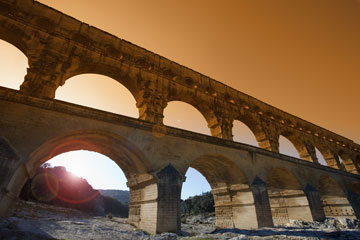 The Pont du Gard aqueduct is as old as the Christian religion.
Sylvain Sonnet/Photographer's Choice/Getty Images

After more than 2,000 years of architectural use, the arch continues to feature prominently in bridge designs and with good reason: Its semicircular structure elegantly distributes compression through its entire form and diverts weight onto its two abutments, the components of the bridge that directly take on pressure.

Tensional force in arch bridges, on the other hand is virtually negligible. The natural curve of the arch and its ability to dissipate the force outward greatly reduces the effects of tension on the underside of the arch.

But as with beams and trusses, even the mighty arch can't outrun physics forever. The greater the degree of curvature (the larger the semicircle of the arch), the greater the effects of tension on the underside of the bridge. Build a big enough arch, and tension will eventually overtake the support structure's natural strength.

While there's a fair amount of cosmetic variety in arch bridge construction, the basic structure doesn't change. There are, for example, Roman, Baroque and Renaissance arches, all of which are architecturally different but structurally the same.

It is the arch itself that gives its namesake bridge its strength. In fact, an arch made of stone doesn't even need mortar. The ancient Romans built arch bridges and aqueducts that are still standing today. The tricky part, however is building the arch, as the two converging parts of the structure have no structural integrity until they meet in the middle. As such, additional scaffolding or support systems are typically needed.

Modern materials such as steel and prestressed concrete allow us to build far larger arches than the ancient Romans did. Modern arches typically span between 200 and 800 feet (61 and 244 meters), but West Virginia's New River Gorge Bridge measures an impressive 1,700 feet (518 meters) [source: NOVA].