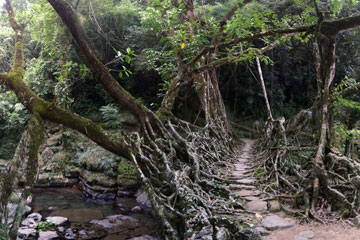 While the first bridges were likely nothing short of logs toppled over creeks, most of humanity's bridge-building legacy is a story of artificial structures crafted out of the elements. We can find, however, one of the most striking exceptions to this rule in the Meghalaya region of northern India.

During monsoon season, locals here endure some of the wettest conditions on Earth, and rising floodwaters cut the land into isolated fragments. Build a bridge out of woven vines or hewn boards and the rainforest moisture will inevitably turn it into compost. As you can see from the photo, the local people developed a rather elegant solution to the problem: They grow their bridges out of natural vegetation. In doing so, they turn a large portion of the bridge maintenance duties over to the bridge itself.

Building a living bridge takes patience, of course. The local villagers plan their constructions a decade or more in advance. The War-Khasis people, for instance, create root-guidance systems from the hollowed halves of old betel nut tree trunks to direct strangler fig roots in the desired direction. They simply direct the roots out over a creek or river, spanning it, and only allow the roots to dive into the earth on the opposite bank. The larger living bridges boast lengths of up to 100 feet (30 meters), can bear the weight of 50 people and can last upward of 500 years [source: Merchant].

But the weight of car or foot traffic is far from the only force affecting a bridge. On the next page, we'll get to know two more of them.