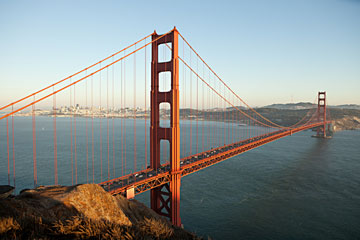 The supporting cables, on the other hand, receive the bridge's tension forces. These cables run horizontally between the two far-flung anchorages. Bridge anchorages are essentially solid rock or massive concrete blocks in which the bridge is grounded. Tensional force passes to the anchorages and into the ground.

In addition to the cables, almost all suspension bridges feature a supporting truss system beneath the bridge deck called a deck truss. This helps to stiffen the deck and reduce the tendency of the roadway to sway and ripple.

Suspension bridges can easily cross distances between 2,000 and 7,000 feet (610 and 2,134 meters), enabling them to span distances beyond the scope of other bridge designs. Given the complexity of their design and the materials needed to build them, however, they're often the most costly bridge option as well.

But not every suspension bridge is an engineering marvel of modern steel. In fact, the earliest ones were made of twisted grass. When Spanish conquistadors made their way into Peru in 1532, they discovered an Incan empire connected by hundreds of suspension bridges, achieving spans of more than 150 feet (46 meters) across deep mountain gorges. Europe, on the other hand, wouldn't see its first suspension bridge until nearly 300 years later [source: Foer].

Of course, suspension bridges made from twisted grass don't last that long, requiring continual replacement to ensure safe travel across the gap. Today, only one such bridge remains, measuring 90 feet (27 meters) in the Andes.

What's next? Hint: You'll have to stay (that's a hint!) around to find out.