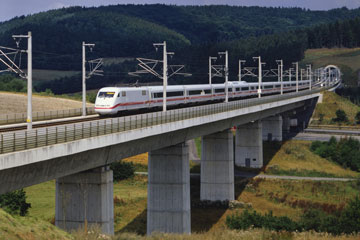 A train speeds over a beam bridge.
Jupiterimages/Workbook Stock/Getty Images

Bridge building doesn't get any simpler than this. In order to build a beam bridge (also known as a girder bridge), all you need is a rigid horizontal structure (a beam) and two supports, one at each end, to rest it on. These components directly support the downward weight of the bridge and any traffic traveling over it.

However, in supporting weight, the bream bridge endures both compressional and tensional stress. In order to understand these forces, let's use a simple model.

Many beam bridges use concrete or steel beams to handle the load. The size of the beam, and in particular the height of the beam, controls the distance that the beam can span. By increasing the height of the beam, the beam has more material to dissipate the tension. To create very tall beams, bridge designers add supporting latticework, or a truss, to the bridge's beam. This support truss adds rigidity to the existing beam, greatly increasing its ability to dissipate the compression and tension. Once the beam begins to compress, the force spreads through the truss.

Yet even with a truss, a beam bridge is only good for a limited distance. To reach across a greater length, you have to build a bigger truss until you eventually reach the point at which the truss can't support the bridge's own weight. Brace yourself for some serious stats on truss bridges on the next page.