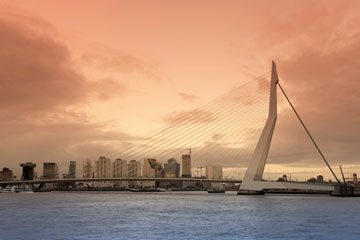 At first glance, the cable-stayed bridge may look like just a variant of the suspension bridge, but don't let their similar towers and hanging roadways fool you. Cable-stayed bridges differ from their suspension predecessors in that they don't require anchorages, nor do they need two towers. Instead, the cables run from the roadway up to a single tower that alone bears the weight.

The tower of a cable-stayed bridge is responsible for absorbing and dealing with compressional forces. The cables attach to the roadway in various ways. For example, in a radial pattern, cables extend from several points on the road to a single point at the tower, like numerous fishing lines attached to a single pole. In a parallel pattern, the cables attach to both the roadway and the tower at several separate points.

Engineers constructed the first cable-stayed bridges in Europe following the close of World War II, but the basic design dates back to the 16th century and Croatian inventor Faust Vrancic. A contemporary of astronomers Tycho Brache and Johannes Kepler, Vrancic produced the first known sketch of a cable-stayed bridge in his book "Machinae Novae."

Today, cable-stayed bridges are a popular choice as they offer all the advantages of a suspension bridge but at a lesser cost for spans of 500 to 2,800 feet (152 to 853 meters). They require less steel cable, are faster to build and incorporate more precast concrete sections.

Not all bridges requires great hunks of steel and concrete though. Sometimes a tree root or two will do the trick.