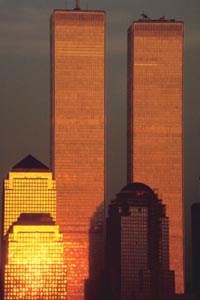 Long before the World Trade Center became synonymous with the most damaging terrorist attack in U.S. history, it was a symbol of engineering brilliance. Upon its completion in 1973, the two towers that rose from the 16-acre (64749.7-square-meter) complex consisting of seven different buildings in lower Manhattan were the tallest structures in the world. But the construction of such mammoth structures had its challenges.

The first major challenge was the building site itself. The location selected for the project, on Manhattan's Lower West Side, had been built upon generations of landfill that had actually grown and compacted on itself so much that it had extended the Lower West Side of Manhattan into the Hudson River. To reach a solid base of bedrock, workers had to dig down 70 feet (21.3 meters). But because of the proximity of the river, a barrier needed to be created that would keep the excavated section of the city from filling with water as fast as the earth was removed.

The answer was something that became known as the slurry trench method. A trench dug deep in the ground was filled with a slurry mixture made from water and an expanding clay known as bentonite. This slurry was denser than the surrounding dirt, so it kept the ditch from caving in. Once filled with the mixture, a steel cage was dropped in that weighed 25 tons and stretched to a height of seven stories. Concrete was then poured into the trench. As the concrete was heavier than the slurry, it forced the clay mixture out and hardened around the cage, making a section of underground wall. Workers then moved on to the next section. When the wall was complete, forming what became known as the "bathtub," the rest of the earth was removed from inside it without danger of flooding the newly opened space.

Another concern unique to the construction of the World Trade Center was the fact that the PATH commuter rail line ran directly through the center of the construction site. Instead of interrupting service, engineers designed a protective cradle for the underground line and as a result, the train ran throughout the entire project, carrying 130,000 passengers a day [source: 911veritas].

How Was The World Trade Center Unique?

There were two main factors that greatly distinguished the two main towers of the World Trade Center from anything that had been built before them: their walls and their elevators.

Prior to the construction of the Twin Towers, skyscrapers were designed to support themselves through large internal columns spaced about 30 feet (9 meters) apart, which interrupted the flow of interior space. For this project however, the engineers came up with a different solution -- the exterior walls themselves would support the bulk of the structure, and they would get a boost from one single column of beams in the center.

This allowed for a much more open plan on every floor of the building, which not only had aesthetic value but had financial worth as well -- the more floor space, the higher the rent the buildings' owners could collect.

Adding to the creation of open floor plans was the design of the elevators. A classic problem in skyscrapers is that as buildings grow taller, the number of residents increases. With more residents, more elevator shafts are needed. But the more elevator shafts there are, the less floor space there is for tenants.

This issue was solved in the construction of the twin towers through the use of express and local elevators. In much the same way the New York City subway system worked, express elevators would take passengers to "sky lobbies" placed on various floors throughout the building where they would then disembark and switch to local elevators to get to their required floor. The use of this system cut the number of required elevator shafts in half, thus preserving valuable floor space.

Not only was the construction of the World Trade Center unique, but the tools used to construct it were as well. To erect the tallest building in the world, "kangaroo cranes" were brought over from Australia. These mighty building machines could raise themselves up through the use of heavy-duty hydraulics, in effect growing with the building itself. The building of the Twin Towers marks the first time such cranes were used in America .

The design of the Twin Towers is often called a "tube within a tube," referring to the fact that all of the weight of the building was supported by the external walls and an internal column. Previously, the exterior walls of a skyscraper were called curtain walls -- they weren't relied upon for strength, so it wasn't imperative that super-sturdy materials were used for them.

But for towers one and two, the external walls would not only bear the weight of the interior floors, but they would also have to withstand tremendous pressure from the wind. Because the external "tube" of each tower was perforated with openings for windows, the entire web of steel could shift in strong winds, transferring the load from the windward side to the leeward side of the buildings through something known as Vierendeel action [source: FEMA].

For the columns that comprised the walls, a mixture of 12 different types of steel with yield points between 42,000 pound per square inch (psi) and 100,000 psi were used, while the interior columns consisted of a steel known as A36, a designation which meant it had a yield strength of 36,000 psi. The thickness of these columns also varied -- from as thin as 0.25 inch (6.35 millimeters) at the top of the building to as thick as 4 inches (10.16 centimeters) at the base [source: FEMA]. In all, 200,000 tons of super-strong steel (which had just recently become available in 1968) were used to create the two towers [source: Gayle].

Just inside the walls, at approximately 10,000 locations throughout each tower, visco elastic dampers were installed [source: FEMA]. These were basically large shock absorbers that could bend with wind pressure and then return to their original form. Because the towers were designed to sway and adjust in the wind, these dampers helped reduce the impact of this movement on occupants. It was the first time this technology had ever been used in a high-rise [source: FEMA].

The floors that flowed between the supporting walls and interior columns were made from 0.5 inch (1.27 centimeter) thick steel slabs covered in 4 inches (10.2 centimeters) of lightweight concrete.

10 Green Structural Engineering Marvels
Can drones be used in construction?
What's the Difference Between an Avenue, a Road and a Boulevard?